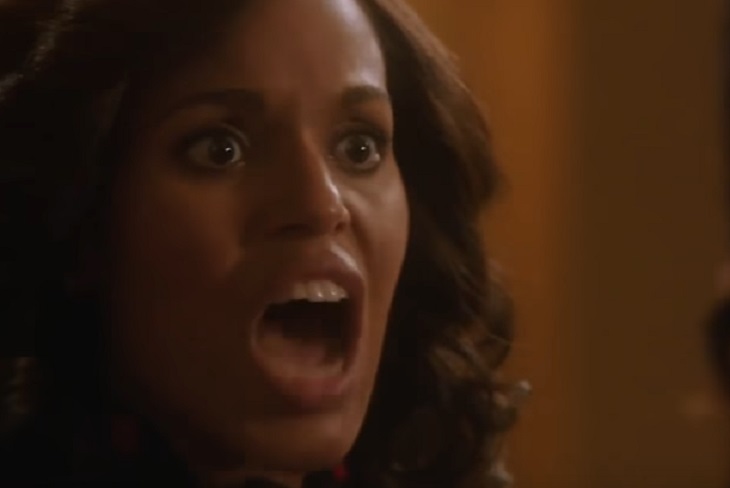 ‘Scandal’ spoilers for season 6 indicate that Mellie Grant was elected president, but there may have been a change to the script. Speculation is that due to the current political climate, creator and executive producer Shonda Rhimes wrote two endings to the sixth season premiere based on the real-life 2016 presidential election.

ABC released the trailer for the season 6 premiere of Scandal which picks up with Mellie [Bellamy Young] and Jake Ballard [Scott Foley] battling Governor Francisco Vargas [Ricardo Chavira] and Cyrus Beene [Jeff Perry] for control of the White House.

The season 5 Scandal finale caught everyone off-guard when Cyrus decided to dump David Rosen [Joshua Malina] as Governor Vargas’s running mate and claim the spot for himself. In the episode titled ‘That’s My Girl’ viewers believed Mellie would claim the presidency in a landslide.

The ‘Scandal’ season 6 spoiler preview gives viewers a look at an excited Mellie Grant watching the election results. “This is it! Turn up the TV!” the senator from Virginia and former First Lady shouts to her staffers. By the look on everyone’s faces as the results come in, t’s possible something went terribly wrong and Governor Francisco Vargas and Cyrus have pulled out an upset and won the election.

Did Shonda Rhimes initially write the script for season 6 of ‘Scandal’ with Mellie Grant as the winner of the presidential election? Speculation is that when the Democratic nominee lost the real-life 2016 election Shonda Rhimes decided to go with an alternate script that has Governor Francisco Vargas and Cyrus Beene winning in a landslide.

There are hints that Olivia Pope [Kerry Washington] let the election slip away from Mellie and Jake. In the ‘Scandal’ spoiler preview for season 6 President Fitzgerald Grant asks Olivia, “What if you’re wrong?” Wrong about what? That Mellie would have no problem beating Vargas?

Olivia Pope reaches crisis mode and yells back at Fitz, “I won’t be wrong!” But is Olivia completely off base this time around? Not only is Fitz upset with Olivia, but Mellie has had enough too.

What says Mellie? “I’m done running for president!” And what is Olivia Pope’s reply? “I’m not!” Mellie seems very confused by Olivia’s statement. But viewers should know within the first 10 minutes what has happened the ‘Scandal’ spoiler promo promises.