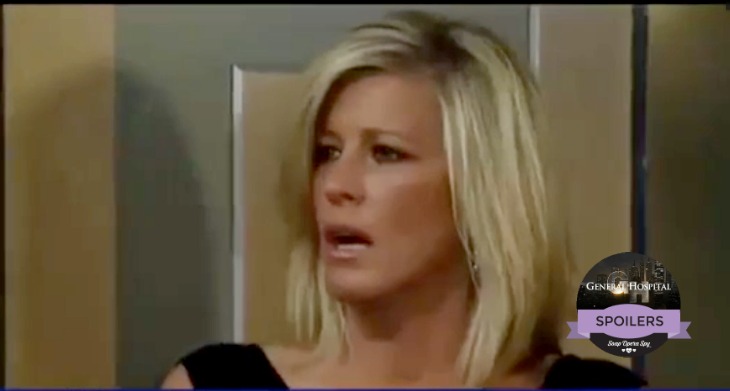 ‘General Hospital’ (GH) spoilers reveal that on Wednesday, March 23, the Hamilton Finn drama continues, Kristina has to answer to her father, Helena’s final gifts frustrate her heirs, and Tracy pitches a fit at the hospital. Here’s what we’ll see on tomorrow’s show.

First, it looks like there may have been some fallout from Sonny Corinthos [Maurice Benard] sending Max Giambetti [Derk Cheetwood] to poke around at Wesleyan. How will Kristina Corinthos [Lexi Ainsworth] find out Sonny’s right hand was on her college campus asking questions?

We know Professor Parker [Ashley Jones] is back soon. Kristina gets a surprise visitor but is it her girl crush or someone else from school? Kristina confronts her father and demands answers about why he was prying into her private life on campus.

Sonny tries to be an understanding father, but he’s in over his head. Will Kristina be furious with him? How much longer can she hide her secret? Will Max tell Sonny that Kristina propositioned a lady professor, not a male as he assumed?

Out at Wyndemere, Hayden Barnes [Rebecca Budig] is in full freak out mode over Sam Morgan [Kelly Monaco] name dropping “Naomi Dreyfus.” Whomever that is, it hit Hayden hard. Looks like Hayden will be talking to herself in a panic and Liz Webber [Rebecca Herbst] may overhear.

Liz wants to know what Hayden is hiding – but no way will she tell her. Instead, look for Hayden to lie and protect herself at all costs. Meanwhile, Nikolas Cassadine [Tyler Christopher] runs into his mom Laura Spencer [Genie Francis] who is looking for answers about the key.

Despite Nikolas playing like he doesn’t care, Laura encourages him to get the answers about what Helena Cassadine [Constance Towers] left them. So who is that man in the tea pot reflection? Was it Nik poisoning his Granny or a mysterious other Cassadine?

A screaming maid at the MetroCourt draws Carly Corinthos [Laura Wright] to the room of Dr Hamilton Finn [Michael Easton]. Looks like the maid might have been frightened by his lizard. Carly however is stunned because she sees Silas Clay’s face.

How long til Finn tells everyone to drop the doppelganger talk? At GH, Tracy Quartermaine [Jane Elliot] demands that Liesl Obrecht [Kathleen Gati] find Dr Finn STAT so he can start her treatments. Looks like Liesl will be crushed by peer pressure and has to give Finn privileges to practice at GH.

What do you think GH fans? Is Finn a good guy or bad? How long til Laura finds the lock for her key? What is Helena’s final scheme? Share your comments below on what’s going on at GH and check back with Soap Opera Spy every day for more ‘General Hospital’ spoilers and news.

‘The Bold And The Beautiful’ News: Darin Brooks And Kelly Kruger Married, Couple Says ‘I Do’s In Hawaii