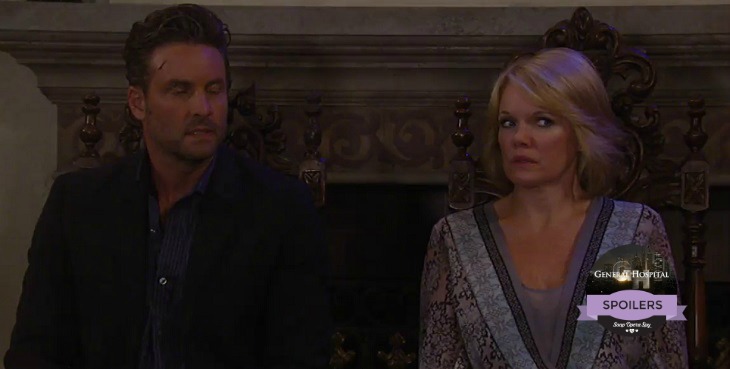 ‘General Hospital’ (GH) spoilers for Tuesday, July 19 reveal that Julian can’t catch a break, things get ugly on Cassadine Island, Nina and Curtis discuss his investigation, and Alexis has an update for Diane after taking the pregnancy test.

GH spoilers tease that Julian Jerome [William deVry] will take a turn for the worse while in the hospital. Griffin Munro [Matt Cohen] is assigned to his case and tells Julian he knows what he did to his father and he has to trust that the justice system will punish him.

Over at the MetroCourt, Nina Clay [Michelle Stafford] meets with Curtis Ashford [Donnell Turner] to discuss the assignments she’s given him. Nina tells Curtis she wants to call off the investigation into Claudette Bolland [Bree Williamson].

Andre Maddox [Anthony Montgomery] and Jordan Ashford [Vinessa Antoine] get off on the wrong foot with a confusing message. When she meets Andre, he seems irritated and Jordan asks what’s bothering him. What’s up with the usually mild-mannered doctor?

We didn’t see the results of Alexis Davis’ [Nancy Lee Grahn] pregnancy test yet, but by the look on her face, she might be preggers and expecting another child with Julian. Alexis calls Diane Miller [Carolyn Hennesy] over to talk.
Diane wants to know what feelings Alexis has for Julian after all the recent drama and Alexis says she wants to see her homicidal husband in jail and nothing else. Will Alexis share the results of the pregnancy test with her lady lawyer pal?

Plus, what happened with the fact that Alexis went through menopause five years ago and GH did a whole storyline on that? Let’s hope the writers explain it rather than ignoring a major plot from Alexis’ past that should have made this pregnancy implausible.

Out on Cassadine Island, Nikolas Cassadine [Nick Stabile] gets in Valentin Cassadine’s [James Patrick Stuart] face and tells him he won’t get anything if anyone on the island is harmed. What is it that Valentin wants? Revenge? Money?

Be sure to watch the Tuesday, July 19 episode of GH then tune in to Soap Opera Spy for more General Hospital spoilers and news.

‘The Young And The Restless’ News: ‘Y&R’ And ‘B&B’ Casting Walk-On Roles – You Could Be On CBS Soaps!