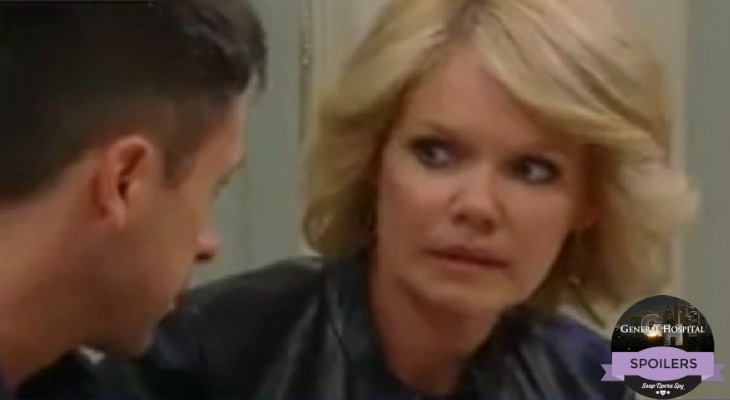 ‘General Hospital’ (GH) spoilers for Friday, March 18 reveal suspicions at Crimson, the breastfeeding lawsuit kicks off with a bang, Ava is terrified, Sonny schemes, and more about Kristina’s troubles is revealed. Here’s what we’ll see on tomorrow’s GH episode.

Alexis Davis [Nancy Lee Grahn] may be a little less smug about her chances against the Port Charles Mayor when she sees that Diane Miller [Carolyn Hennesy] is repping Mayor Lomax [Shari Belafonte]. Alexis says this is an abuse of power case.

Lomax has already taken city business away from the MetroCourt over the case and then she plays dirty as the lawsuit kicks off and demands that Olivia Falconeri [Lisa LoCicero] and Alexis drop the case. They won’t drop it and then someone surprising gets involved.

Carly Corinthos [Laura Wright] will somehow insert herself into the lawsuit and whatever it is that she does will tip the scales in favor of Olivia and Alexis. Hmm. Wonder what Carly has to contribute about public breastfeeding… We’ll see!

Curtis Ashford [Donnell Turner] meets up with Valerie Spencer [Brytni Sarpy] for a date and tells her she’s overdressed. That sure sounds sexy. What does hunky Curtis have in mind for his night out with Valerie? Wonder if Dante Falconeri [Dominic Zamprogna] will see them and make a comment.

Ava Jerome [Maura West] is freaking out over the black rose she got and is certain some of her Jerome underlings are out to get her for working with DA Paul Hornsby [Richard Burgi]. Her brother Julian Jerome [William deVry] is not encouraging and says she’s a “dead woman walking.” Not cool dude.

Sonny Corinthos [Maurice Benard] tells Carly he’s confident baby Avery will be with them for good because Ava will come to her senses and realize she’s better off with them. Hmm. We’ll see on that too. Kristina Corinthos [Lexi Ainsworth] is hurt by what Sonny said to her.

She’ll talk to Molly Lansing [Haley Pullos] and come clean on more of the Professor Parker [Ashley Jones] story and it looks like Parker will be back in Port Chuck soon. Alexis tries to reassure Kristina later that all is not lost and things will work out.

Related: Nicolas Bechtel Back at General Hospital! Is Spencer Cassadine Coming Back?

Over at Crimson, Nina Clay [Michelle Stafford] has once again turned Julian’s lemons into successful lemonade and it looks like her contest notion is a huge hit. Julian will be very disappointed to find out that what he did backfired and Crimson is stronger than ever.

Maxie Jones [Kirsten Storms] asks Nina who would benefit from Crimson going belly up and they try and pinpoint the suspect. Do they know about Julian’s tax issues? How long until they realize that the boss is the saboteur and hit back at him hard?

Don’t miss any of the Friday, March 18 GH and come back to Soap Opera Spy every day for more ‘General Hospital’ spoilers and news.