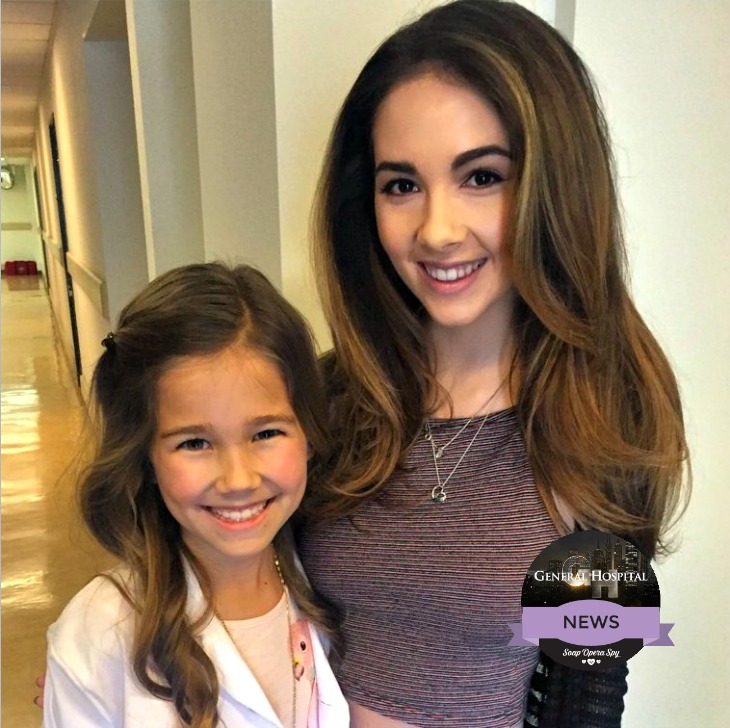 Who could that be giving you a tease at tomorrow’s #GH?
Posted by General Hospital on Tuesday, March 8, 2016

But now Haley Pullos (Molly Lansing Davis) has posted an Instagram pic of her and her young costar in the halls of the GH backstage area and captioned it “got to see my lil babe today!!!!” This is great news for GH fans, but it also comes at a worrisome time.

With news breaking yesterday that James Nigbor was shocked by a sudden recast, GH fans are wondering what’s going on in Port Chuck. Nigbor’s recast as Jake Spencer, son of Liz Webber [Rebecca Herbst] and Jason Morgan [Billy Miller], seems like an omen of more recasts to come.

GH showrunners promised that Brooklyn would be back on the show despite the permanent departure of Patrick Drake [Jason Thompson], but is this spring break visit destined to be Brooklyn’s last hurrah as Emma Drake?

With Josslyn Jacks now portrayed by young teen Eden McCoy, despite that both Emma and Jake are older than her character, we have to wonder if more SORAS (soap opera rapid aging syndrome) recasts are coming.

Will Emma be aged up or just left off the playing field? Will Jake’s recast portrayer be a young teen as well? Will this spring break visit be the last time we see Emma Drake with Brooklyn Rae Silzer in the role?

When the new co-headwriters Passanante and Altman took the helm at GH, they said they were cutting back on storylines centered on the younger set and then there was the stunning recast of Josslyn five years older than she should be. Was that just a one-off?

Brooklyn is back as Emma starting on March 30 and we can’t wait to see her. Fingers crossed this won’t be the last we see of the pint-sized power house actress. We’re still hoping she takes home an Emmy for her touching performance as Patrick and Sam Morgan [Kelly Monaco] called it quits.

What do you think GH fans? Are you excited to see Brooklyn back on set? Are you worried she may be recast and falls victim to SORAS like Josslyn did? Do you think Jake’s recast is bad news for the short set in Port Charles?

Share your comments below and check back with Soap Opera Spy for more ‘General Hospital’ spoilers and news.