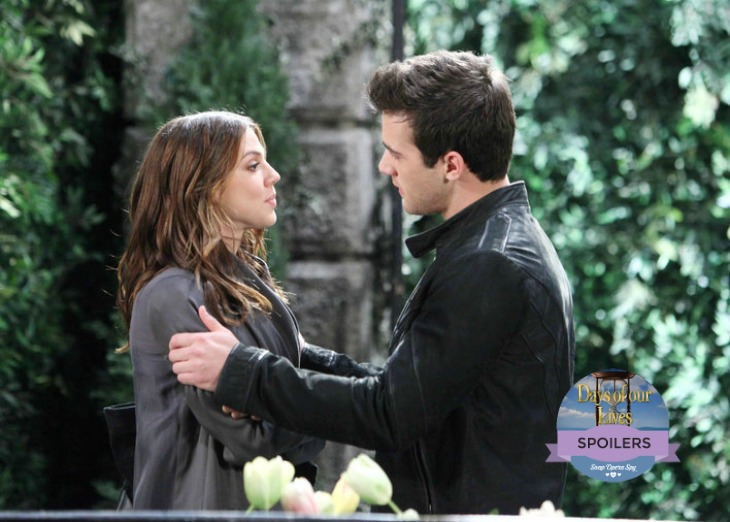 “Days of Our Lives” spoilers for Tuesday, April 19, tease that Abigail (Kate Mansi) will decide she needs to open up to someone about what she’s going through. Chad (Billy Flynn) is doing everything he can to help Abigail, but she needs professional guidance. She’ll turn to Marlena (Deidre Hall) in an effort to make sense of her struggles.

DOOL spoilers say Abigail will admit that she deliberately set Ben (Robert Scott Wilson) on fire. She’ll confess that she wanted to kill Ben so she could finally be free of the threat. Since Ben survived, Abigail is still being tormented.

Of course, there are no guarantees Abby would’ve felt at peace if Ben had died. Abigail is a mess right now and she doesn’t know how to get herself back on track. That’s why Marlena will recommend that Abby stay in a mental institution for a while. It will allow her to recover and become the mom Thomas needs.

Other “Days of Our Lives” spoilers indicate that Theresa (Jen Lilley) will have a shocking proposal for Victor (John Aniston) and Maggie (Suzanne Rogers). DOOL viewers know that Deimos (Vincent Irizarry) forced Victor to sign over his home and everything he owns. That means Victor and Maggie will have nowhere to go when they get out of the hospital.

Could Theresa offer a spare room to Maggie and Victor? Theresa obviously cares a great deal about Maggie. As for Victor, it would actually be an interesting twist if he received an invitation from the woman he threw out of his home. Stay tuned to see if Theresa will show them some kindness.

Elsewhere, Deimos will have a surprising proposal of his own in mind. “Days” spoilers reveal that Deimos will have an attractive offer for Kate (Lauren Koslow). It looks like Kate won’t be able to pass this one up. It might have something to do with Deimos’ new ownership of Victor’s companies.

Perhaps Kate could come on board in a prestigious role and have plenty of money to make Basic Black a success. There’s no doubt that Deimos wants to keep Kate happy. However, Deimos is developing a bit of an interest in Nicole (Arianna Zucker) as well.

Unfortunately, that interest could get Deimos in deep trouble. DOOL rumors hint that Nicole could end up duping Deimos through Victor’s upcoming plan. Stick with “Days of Our Lives” for updates on what’s in store.

So “Days” fans, what do you think about the news that Abigail will confide in Marlena? Will Abby take Marlena’s advice? What will Theresa suggest to Victor and Maggie? Will Kate accept Deimos’ offer? Voice your opinion in the comments below and don’t forget to check Soap Opera Spy often for the latest “Days of Our Lives” spoilers, rumors, updates and news.