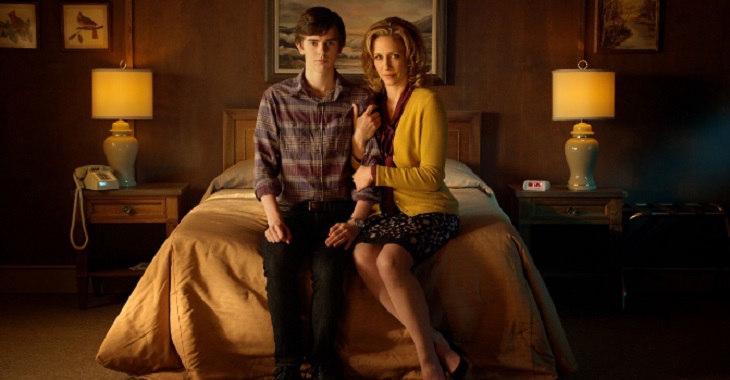 Bates Motel has been one of the most talked about television series in a long time.  Initially, when people heard that it was going to be a prequel, of sorts, to Alfred Hitchcock’s 1960 thriller “Psycho”, many were not sure how successful the show would actually become.  Most viewers were pleasantly surprised.

A&E’s Bates Motel’s 5th season premiere in 2017 is approaching quickly, and fans are both excited and sad because it has been announced that this is the final season as well.  As if Norman Bates’ (Freddie Highmore) failed attempt at murder-suicide left his beloved mother, Norma (Vera Farmiga) dead and Norman all alone in the Bates’ house wasn’t devastating enough.

Bates Motel spoilers indicate that the show may be shifting away, in a big way, from the original movie script.  We revealed earlier this year that Rhianna is joining the show as Marion Crane, the character famous for the creepy shower scene in the 1960’s movie, “Psycho”; and we now learn they have cast Isabelle McNally as Madeline Loomis.  For those who have seen the movie, Loomis is the last name of Marion’s lover, Sam.

If Bates Motel is going to continue to follow the script somewhat, we don’t really know how Madeline Loomis fits into the story because she was never a part of the movie.  Madeline Loomis could be the ex-wife of Sam, and the reason he is unable to marry Marion, but how her character will fit into the storyline is still being kept under wraps.

One thing that’s worth noting is, in the movie “Psycho”, Norman’s motives for killing Marion Crane was because of how much she looked like his mother.  Rhianna looks nothing like Vera Farmiga, but Isabelle McNally does.  It’s too bad that we have to wait until the new year to see how this thriller unfolds.  Be sure to check back often for updates, news, rumors and spoilers!

‘Days of Our Lives’ Spoilers Thursday October 6: Clyde Plots Against Chad – Marlena and Kate Team Up – Andre Interested in Aiden’s Dirt on Hope

‘The Young and the Restless’ Spoilers Thursday October 6: Travis Comes Clean About Shocking Past – Mariah Faces Change of Plans – Abby Has Sad Realization