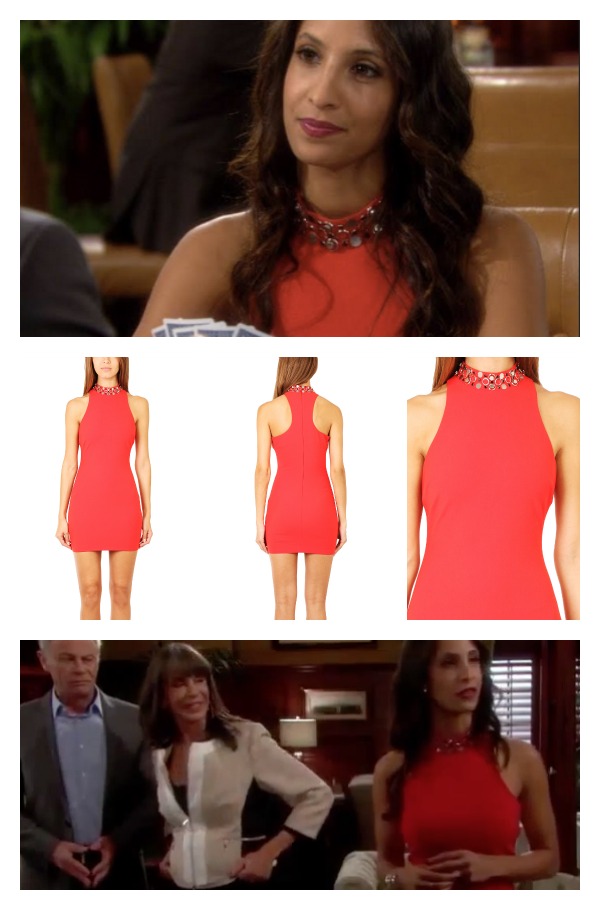 Lily Winters Ashby looks stunning in red, and the dress she wore in this scene was super sexy. I love how Christel Khalil can easily switch from the comfortable clothes of the girl next door to become a sultry vixen with the change of a dress.

The YR favorite has been through so much in her life. Lily underwent a hysterectomy and chemotherapy in 2009 and managed to escape an explosion at Genevieve’s with a bit of smoke inhalation. She was also part of the bar brawl at Nick’s bachelor party and Sharon’s bachelorette party.

Now, you can score Young and The Restless Fashion and get Lily Winters Ashby’s red jeweled dress for less and emulate Christel Khalil’s Style!

Ashby wore an Elizabeth and James Maryse Dress with a jeweled collar. A high studded neckline adds a pop of modern elegance to the curve-hugging silhouette. The cut of the dress also features a racerback cut to show some extra skin.

It’s currently out of stock at Bloomingdales, but you can snag the exact dress at Blue and Cream, currently on sale for $197.50! If you are willing to pay a bit extra and prefer black, you can find it in the darker hue with silver and brassy accents via Amazon.

‘The Bold and the Beautiful’ Spoilers February 9-13: Hostile Takeover, Jealousy and Revenge