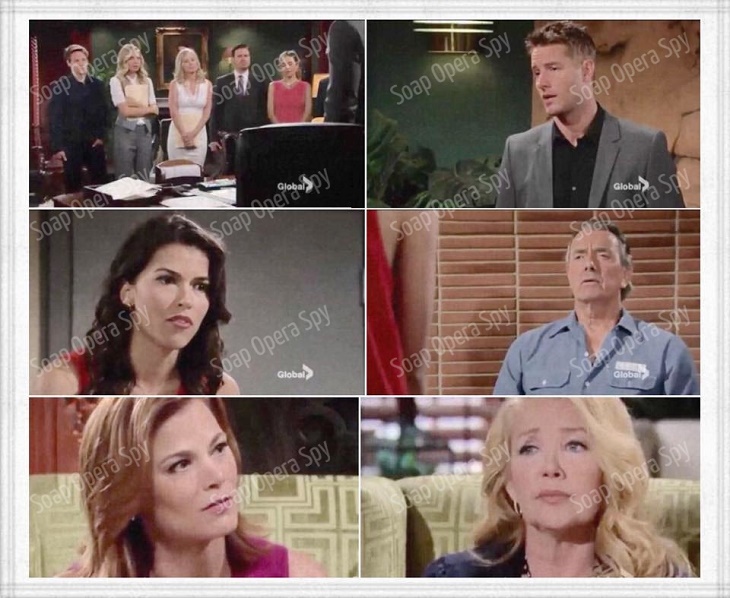 “The Young and the Restless” spoilers for Thursday, July 16 reveal that Y&R viewers can expect tearful farewells and shocking moments in Genoa City. The episode opens with Adam (Justin Hartley) saying goodbye to Conner (Gunner and Ryder Gadbois) and Chelsea (Melissa Claire Egan). Adam leaves for the meeting he called as Chelsea sobs.

Meanwhile, Sage (Kelly Sullivan) tells Nick (Joshua Morrow) that she’d never thought she’d be able to find love or have a baby with someone like him. Nick says nothing will get in the way of their new family. Once Nick leaves, Sage writes a heartfelt apology note for covering up Adam’s secret. Sage says she’ll love Nick no matter where she is and she leaves the note for Nick to find later. It looks like Sage is planning on getting out of town ASAP.

Stitch (Sean Carrigan) picks up Ashley (Eileen Davidson) and excitedly tells her he’s a doctor again. Ashley hates to lose Stitch at the lab, but she’s thrilled for him. Stitch thinks this calls for a celebration and Ashley mentions that Abby (Melissa Ordway) would enjoy that. Stitch says he hasn’t been able to track Abby down to give her the news just yet.

At the meeting, Adam says that as of right now, Gabriel Bingham (Justin Hartley) is gone. Chelsea rushes in and shouts, “Stop! Not another word!” Nick asks if he was about to resign, but Adam replies that it was just about restructuring the company. Adam says he needs to speak to Chelsea privately and everyone else leaves in a huff. Chelsea tells Adam that revealing his true identity would change everything. Chelsea declares that he’s Gabriel Bingham and Adam Newman is dead.

At Crimson Lights, Noah (Robert Adamson) tells Summer (Hunter King) that he’s happy she has Kyle (Lachlan Buchanan) for support. Summer hints that maybe Marisa (Sofia Pernas) could be there for Noah, but avoids the topic. Over at the athletic club, Phyllis (Gina Tognoni) tries to convince Nikki (Melody Thomas Scott) to get some answers out of Victor (Eric Braeden) about the shooting.

Other “Young and the Restless” spoilers tease that Abby could be a bit jealous when she learns that Ashley got updates on Stitch’s job before her. Abby says that Gabriel is the only one who has confidence in her as COO. Stitch tries to make plans with Abby, but she has a business meeting to get to. Stitch replies that he can’t do it later because he has a shift. It looks like there’s trouble in paradise for these two.

Marisa shows up to see Victor about their “mutual friend,” Marco (Peter Bergman). Marisa says she knows how Victor teamed up with Marco and what they did to Jack (Peter Bergman). Victor denies knowing Marco and Marisa says she’ll come back some other time. Nikki arrives just as Marisa is leaving. Victor lies and says Marisa was a reporter. Nikki starts in about what Phyllis has been telling her. Victor says Gabriel set him up and he’s hiding another gun.

Back at The Underground, Marisa finds Sage’s note and gives it back to her. Marisa insists that Sage is safe. Sage asks who she is, but Marisa says everyone has secrets. It seems Sage has dodged the bullet for now, but we all know it’s just a matter of time before Nick learns the truth. The rumors hint that more twists and turns lie ahead. Stick with “The Young and the Restless” to see how long Adam and Sage can keep their secret under wraps.

So Y&R fans, what do you think about Chelsea stopping Adam’s announcement? How long can Adam keep this quiet? Will Nick hate Sage forever when he learns what she did? Will Nikki buy Victor’s story? Let us know what you think in the comments below and don’t forget to check Soap Opera Spy tomorrow for the latest “Young and the Restless” spoilers, rumors, updates and news.

‘Days of Our Lives’ Spoilers: Serena Listens in on Eric’s Confession at Church – Jennifer Shocked to Discover What’s Going on with JJ and Kyle