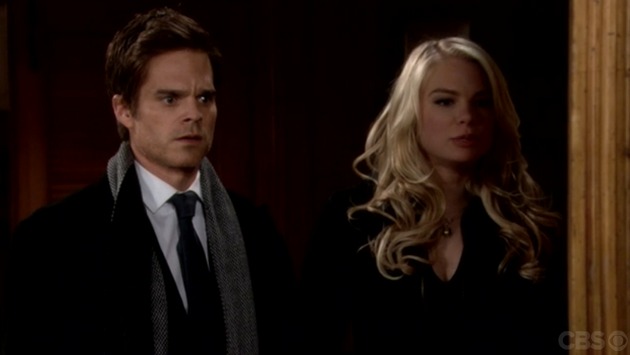 ‘The Young and the Restless’ spoilers for Monday, March 9, tease that some Y&R characters will try to move on as others find it difficult to let go. Ben (Sean Carrigan) will hint that Victoria (Amelia Heinle) is bothered by Billy’s (Burgess Jenkins) engagement news, but Victoria will deny his accusations. When they revisit the topic a little later, Victoria will let Ben know that Billy will always remain a part of her life. As for Billy, he’ll be busy trying to help stressed Chelsea (Melissa Claire Egan) calm down. Billy will hint that they should elope, but Chelsea will want to stick to the plan of a full family wedding.

Meanwhile, Adam (Justin Hartley) will be trying to stick to a plan of his own. When Sage (Kelly Sullivan) blurts out that she wants a divorce, Adam will tell Sage that she only wants to split because of Nick. However, Sage will turn the argument around and say she’s just giving Adam an opportunity to go after Chelsea before she commits to Billy. Adam will convince Sage to stay married, but only if Adam can learn to respect her and quit commenting on her relationship with Nick. Adam will also need to chill out about Billy and Chelsea’s engagement. Soon after their conversation, Sage will have a talk with Chelsea. Her tense demeanor will make Sage suggest that Chelsea might be having second thoughts about marrying Billy. However, Chelsea will say that she wants everything to be just right because her marriage is going to last this time.

At the Jabot lab, Ashley (Eileen Davidson) will have a talk with Abby (Melissa Ordway) about her affair with Austin (Matthew Atkinson). Ashley will worry that Abby is going to continue her mother’s pattern of falling for unavailable men. When Abby says that Summer (Hunter King) won’t forgive her, Ashley will tell Abby that she has to keep trying to earn that forgiveness. Ben will stop by and tell Abby that Austin was digging up dirt for an expose before he died. Austin may have been using Abby to get inside information. However, Abby will say that Austin wouldn’t do that to her and Ben will say he’s sorry. Ashley will also have a short chat with Victoria. The pair will start bickering, but they’ll eventually decide to call a truce.

Other “Young and the Restless” spoilers for Monday, March 9, hint that Summer will start to remember more about what happened the night Austin was killed. After seeing Austin’s reflection in the armoire mirror, Summer will have several flashbacks. Summer will recall Austin and Abby fighting and she’ll remember picking up the bookend after Austin was murdered. Kyle (Lachlan Buchanan) will listen as Summer says she’s not the one responsible for Austin’s death. When Kyle asks if Summer saw anyone hit Austin, Abby will suddenly show up and ask for Summer’s forgiveness. Summer will give her a good slap and indicate that she’ll never forgive Abby for what she’s done.

Billy will also have a heart-to-heart with Gabriel/Adam. Billy will ask Gabriel to be his best man, but Gabe will say that it might be better if Billy asked his brother. After Billy says he would prefer to have the man who saved his life, Gabe will accept the offer and they’ll shake hands on the decision. The rumors say that Adam will soon make his move to win Chelsea back so this could give a whole new meaning to the phrase “let the best man win.”

Get Exclusive ‘The Young and the Restless’ Spoilers: Billy Proposes to Chelsea News & Updates!

‘The Bold and the Beautiful’ Spoilers: Deacon and Brooke Make a Secret Pact – Maya Digs Deeper Into Nicole’s Background – Quinn Gets Excited About Marriage to Deacon

‘The Bold and the Beautiful’ Spoilers: Maya Wants Nicole Eliminated, Nicole Fights Back, Rick Gets Nasty at a Board Meeting