‘The Young and the Restless’ (Y&R) RUMORS: Is Nick Really Sage’s Baby Daddy Or Did She Tamper With Paternity Test 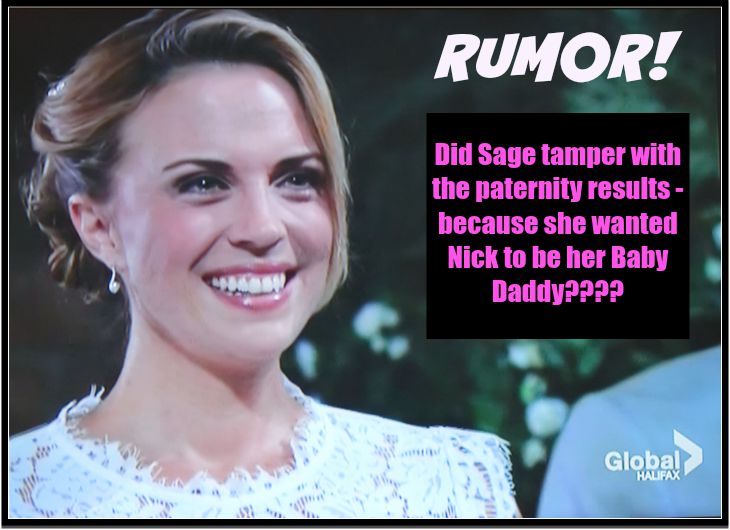 “Young and the Restless” spoilers are heating up and boy; Adam (Justin Hartley) could be in a heap of trouble. Sage (Kelly Sullivan) is expecting her miracle baby, and she seems hell-bent on the fact that Nick (Joshua Morrow) is her child’s biological father. She won’t entertain the thought- or reality- that her little one could be Adam’s child. Is it possible that the DNA test was inaccurate, and her baby is Adam’s?

Yes, she had a DNA test. We all saw that play out on the show. The fact is no one knew they were brothers at the time and so their DNA would be very similar. No one knew that both men were, in fact, Newman’s. Gabriel Bingham was supposed to be Jack’s son (an Abbott), so there wasn’t any reason to question the accuracy of the DNA test.

Or is it possible that Sage swapped the results? She seems desperate enough to try this move. Move over Sharon, there is another paternity swapper on the loose. When Adam was declared dead, Sage had a part in falsifying the records. It isn’t hard to jump to the conclusion that she could falsify paternity results too.

Nick and Sage have a great life right now. Sage clearly wanted to protect her secret at all cost. She is worried that her secret will get out and it will destroy her marriage. When you think about it, she has good reason to be worried. Nick has left his former wives for less than this, and chances are he’d leave her and sleep with Grace Turner (Jennifer Gareis), again.

The whole marriage is a sham and will (soon) blow up in Sage’s face. The Newman’s never accept anyone like they have her. It’s a setup so when she loses it all- she will be heart broken. It will happen- the only question is when? When Nick learns that Adam is not only alive, but she helped him- her fairy tale life is over. How will Nick feel when he finds out that Sage’s child is not his or Gabriel Bingham’s- but Adam Newman’s? How will Chelsea (Melissa Claire Egan) react to Adam having a child with Sage?

‘Days of Our Lives’ Spoilers? Jordi Vilasuso Joins Cast of DOOL – Who is The Mystery Man?