‘The Young And The Restless’ Interview: Kelly Sullivan Discusses ‘Y&R’ Fans Recognizing Her As Sage Warner 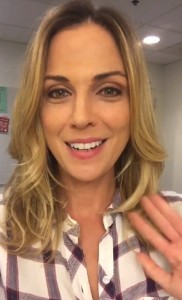 Kelly Sullivan was a little bit nervous the first time she was recognized by a fan after joining the cast of “The Young and the Restless” as Sage Warner. Sullivan wasn’t in a particularly good mood that day and the brief moment changed her mood entirely.

Only four days after getting a new iPhone “The Young and the Restless” star dropped it and cracked the screen. Calling around to second party places to find another screen wasn’t much help because no one had the phones yet – they were that new. So off to the Apple store Sullivan went – and paying big bucks to replace the screen only added to her frustration. “I was just ticked,” the actress revealed in the most recent edition of Soap Opera Digest.

While in line Kelly noticed a man staring – probably close to gaping with his mouth wide open! Kelly Sullivan wondered if she’d been talking to herself – maybe she had made a bit of a spectacle. She had been wrapped up in her own little world while waiting in line. Then the man approached Kelly and said, “Hello! I’m a big fan. I think you’re really great as Sage on ‘The Young and the Restless.'”

Sullivan – who portrayed Connie Falconeri on “General Hospital” before joining the “Y&R” cast – was a more than a little surprised! “Oh, my God, you recognize me?” Kelly asked the “The Young and the Restless” fan. The gentleman said to the actress, “Yeah! You look exactly like you do on television!” Kelly Sullivan said that brightened her entire day – she had been in such a bad mood over the iPhone 6 screen shattering – but the kind words from a fan made her whole day.