‘The Bold and the Beautiful’ Spoilers: Watch The B&B Video Preview For Thursday September 17 – SEE IT HERE! 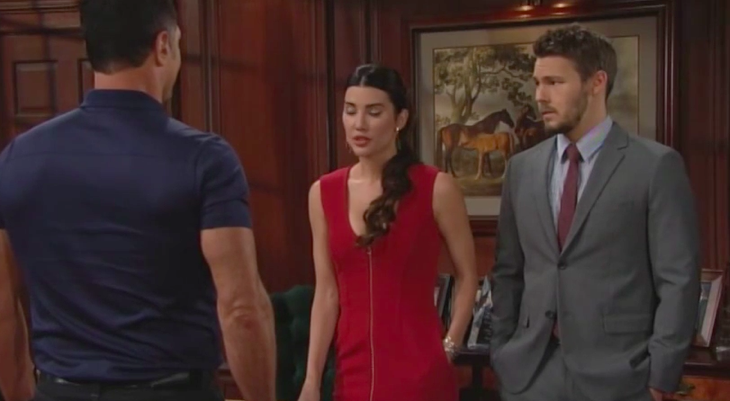 “The Bold and the Beautiful” spoiler preview video for Thursday September 17,2015 reveal that the battle lines are being drawn in the Steffy (Jacqueline MacInnes Wood) vs Ivy (Ashleigh Brewer) battle.

After hearing from Wyatt, Bill is not pleased by the turn of events at Forrester Creations.  Bill and Katie are meeting with Liam and Steffy and Bill asks Liam, “When did your choke collar get to tight that you could spit on the women you married no so long ago?”

Rick and Maya are back from their Honeymoon.  Rick tells Maya, “I had my freak out remember?  Courtesy of Bill Spencer.”

Steffy is not listening to anyone, she is certain firing Ivy was a good decision. Steffy ignores what Bill has to say and tells an unhappy Bill, “I know you think it is your mission every time you walk in this building to let us know what you are entitled too.  But this is a private matter.”

Meanwhile, Wyatt is all guns blazing in his attempt to convince Bill to open a Fashion House.  Wyatt says to Bill, “I’m more of a Spencer than he is and I would be happy to prove that too you.”

Check out the preview below and let us know what you think in the comments below and don’t forget to check Soap Opera Spy for the latest “The Bold and the Beautiful” spoilers, rumors, updates, videos, interviews, fashion and more.

‘The Young and the Restless’ Spoilers: Watch The YR Video Preview For Friday September 18, 2015 – SEE IT HERE!