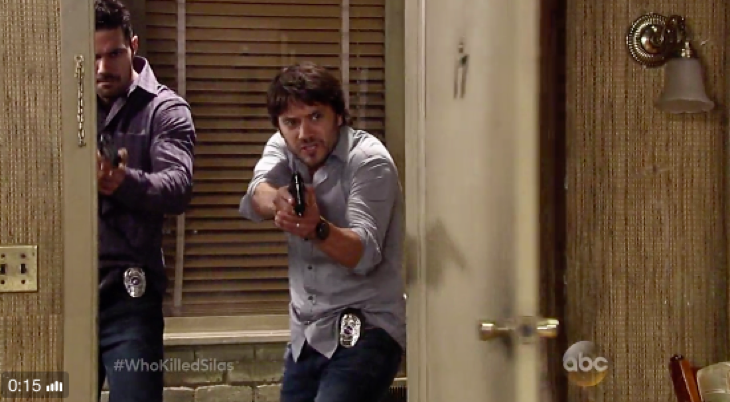 Mob wars and Silas Clay’s murder are front and center on Thursday – here are some ‘General Hospital’ spoilers to get you ready for the August 13 show.

First up is Nina Clay [Michelle Stafford] coming at Ava Jerome [Maura West] in a big way. Ava plays at being Denise, but Nina shuts it down and says Franco [Roger Howarth] told her who she is and what Silas Clay [Michael Easton] did to save her life and that’s why Ava killed him. Nina is ready to expose her as Ava to save Franco. Nina may not even care about the photo. How can Ava shut her down?

And related to the murder, Scotty Baldwin [Kin Shriner] is looking for answers from Franco, especially now that Ric Lansing [Rick Hearst] told him that he’s got a solid motive for Franco having killed Silas. Turns out that Sonny’s secretary overheard Silas and Franco arguing in Scotty’s office. Scotty demands to know what they were arguing about and is frustrated that Franco won’t help with his case.

Related to the mob wars, Sonny Corinthos [Maurice Benard] gets a suspicious phone call and Carly Corinthos [Laura Wright] wants to know what’s going on. As usual, Sonny is all about denials and tells Carly to focus on their happiness and don’t worry about the business and the mob stuff. Sonny is also hyper-focused still on Julian Jerome [William deVry] and is going to be blindsided by the truth.

Dante Falconeri [Dominic Zamprogna] and Nathan West [Ryan Paevey] are out doing some cop-type stuff and bust into an icky apartment and find something disturbing. What could it be? Will they find a body that’s a victim of the mob wars? What else could it be? The only other death around town has been Carlos Rivera [Jeffrey Vincent Parise] and we know that his body got dumped.

Hmm. Also, will what Dante and Nathan find effect Jordan Ashford’s [Vinessa Antoine] questioning of Julian? If whatever they found was on Jerome territory, it could, especially since Jordan does not believe that Julian is out of the business. Good thing that Alexis Davis [Nancy Lee Grahn] is there to protect him in case Jordan gets too aggressive.

And in strange relationship news, Maxie Jones [Kirsten Storms] offers a mea culpa to Valerie Spencer [Brytni Sarpi] about calling her a homewrecking b*tch, but why? Maxie is almost never contrite. She must be plotting something. Meanwhile Dillon Quartermaine [Robert Palmer Watkins] wants to make Lulu Spencer [Emme Rylan] an offer. Is he going to ask her to help with his movie? Hmm…

Watch Thursday’s show then come back to Soap Opera Spy for your daily dose of ‘General Hospital’ spoilers.

‘The Bold and The Beautiful’ August 2015 Trivia: How Well Do You Know B&B?