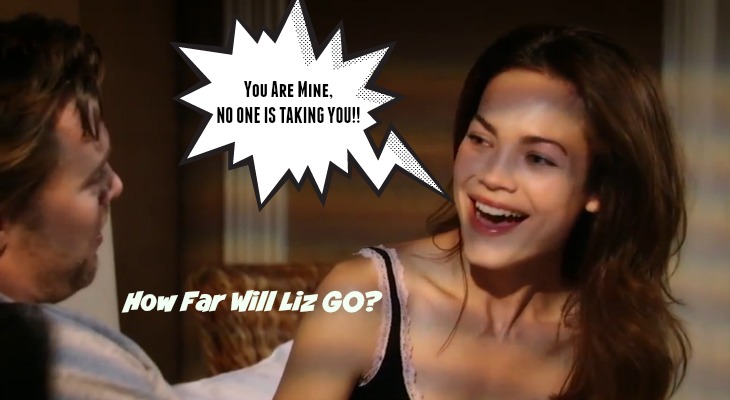 Now that the truth is out, Jason Morgan [Billy Miller] has some critical choices to make and Liz Webber [Rebecca Herbst] is terrified. ‘General Hospital’ spoilers reveal that Liz is gearing up to take some drastic actions to keep her man – at any cost – but just how far will Liz go to keep Jason? Let’s consider…

We have to look at what Liz has already done to determine the scale of what she’s capable of when she’s desperate. Liz has been lying to Jason for the better part of a year, has knowingly kept him from his wife Sam Morgan [Kelly Monaco] and his son Danny, plus other loved ones. And now, Liz has two issues to deal with – first is that there’s still a critical truth that Jason doesn’t know – that she has known his identity since the Nurse’s Ball. Second there’s the renewed rivalry with Sam.

Sam and Liz have been battling over Jason for years, but this time it seems like this is the big final epic conflict for keeps. Look for Liz to go all out in her efforts. Liz will likely play the kid card for starters. Sam has Patrick Drake [Jason Thompson] so she can tell Jason that Danny Morgan is in a stable home with a father figure and Jason can see him when he wants. But if Jason leaves Liz, all three of her boys will be essentially fatherless. That’s a good card to play with Jason since he loves kids.

Liz may also try to get pregnant – if she’s not already – hoping Jason would not walk out on her if she’s knocked up. That would be a big move. She could even lie and says she’s preggers then start trying. Liz may also try to cast Sam in a bad light. She can remind Jason of Sam’s betrayals and times she hurt him. Liz can remind Jason she knew him from the start and her heart recognized him. Liz took care of him and took him in when the rest of Port Charles was either skeptical about him – or downright hostile.

What could also help Liz is to remind Jason that what Sam likes best in him is the part of himself that Jason hates most – the living-on-the-edge mobster. Liz could set herself up to look like the angel on Jason’s one shoulder while Sam is the devil on the other. Liz can tell him she always looked for the kind and decent Jason while Sam encouraged and condoned his darker side. Jason wants to be a better man and not who he was and Liz can try and convince him that he needs her for that.

Finally, there’s little Jake Spencer [James Nigbor] to consider. That kid has problems and Liz has been too focused on her love life to look into what’s going on with her back from the dead son. But now, she can play the “Jake needs you” card and tell Jason that she’s worried about what happened to Jake while he was with Helena Cassadine [Constance Towers] – the same evil woman that tortured Jason. Liz can make it clear that Jake needs Jason around more so than Danny so he needs to stay with her.

In short, we can likely expect Liz to throw everything against the wall to see what sticks. This is her last chance to keep Jason. She will try sex, guilt, love, kids, loyalty – anything she can to put her ahead of Sam in this war for Jason’s heart. And, you never know, she could come out ahead. Jason does, after all, love Liz and has for a long time. It’s almost like half of him belongs to Liz and half to Sam. But unless those two are willing to be sister-wives, someone is going to lose. Let’s hope it’s not Jason…

Check back with Soap Opera Spy often for more ‘General Hospital’ spoilers and be sure to sign up for our newsletter so you don’t miss a thing!

‘The Bold and the Beautiful’ Spoilers: Ivy Rejects Thomas When He Leans in for Kiss – Wyatt Fears He Can’t Hold Onto Ivy