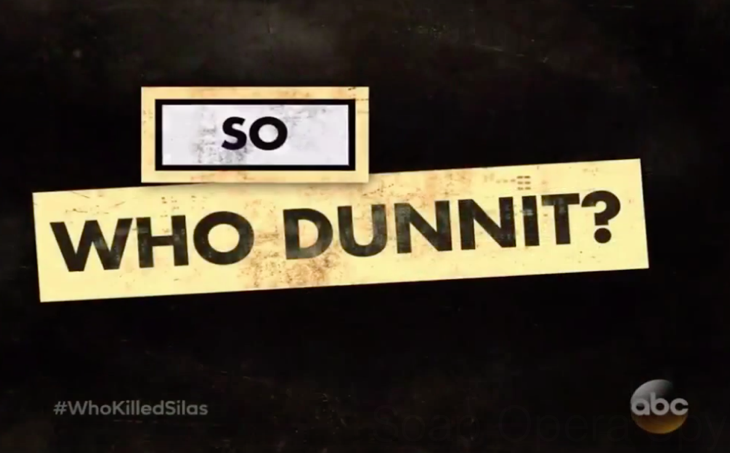 You know that Silas Clay [Michael Easton] has been murdered, but did you know that his death launched a month-long ‘General Hospital’ murder mystery? The burning question is who killed Silas?

#WhoKilledSilas is trending on Twitter and everyone wants to know who the culprit is – and there are so many likely candidates for Port Charles’ latest homicide. Today we’re going to take a look at Madeline Reeves [Donna Mills], a likely suspect for the Port Charles Police Department to consider as the killer of Silas Clay.

First, we have to acknowledge that Madeline comes from scary stock. Her sister is the wicked Dr Liesl Obrecht [Kathleen Gati] and we all know what depths of depravity Dr O is capable of, so there’s badness in Madeline’s DNA. Back when Nina was married to Silas and pregnant, in her 20s, Madeline hated Silas so much that she put Nina into a coma trying to force her daughter to miscarry his baby.

And – if long term ‘General Hospital’ spoilers are to be trusted, that baby is actually alive somewhere but that storyline may have died with Silas. We’ll see. Madeline lied to Nathan West [Ryan Paevey] about being his mother and about Nina being dead. Madeline killed the pharmacist Nakamura to cover up her over-medicating Nina into a coma – so we know homicide is in her wheelhouse already.

But other than Madeline’s long-running hatred of Silas (she tried to frame him for murder and other misdeeds many times), what motive would Maddy have to off her ex son-in-law.

#1 Silas could prove to Nina she wasn’t crazy

Silas knew that Nina couldn’t have kidnapped baby Avery since he did it to use her bone marrow to save Ava Jerome [Maura West]. That would have put Nina back together emotionally and stopped the gaslighting because she wouldn’t have been fragile enough to fall for it.

#2 Silas could end her plotting with Ric

Maddy and Ric are busy trying to steal Nina’s money – when they’re not shagging – and Silas testifying that Nina is completely competent and not a kidnapper would shut them down. This means both Ric and Madeline would be left penniless.

#3 Silas may know about the baby

Although Silas and Nina’s baby was reportedly dead as a result of the miscarriage caused by Maddy, in fact, the child could be alive and would be in their 20s. And if Silas knows that, he could motivate Nina to get her act together and get control of her money.

#4 Silas could have talked Nina into a divorce

If anyone could have gotten Nina to sign annulment papers in an instant, it would have been Silas. Nina still loved him and he was able to influence her. That would have meant bye bye Ric, bye bye Maddy – no money for either of you.

#5 Silas could have ended up with the money

Despite Nina’s new love for Franco [Roger Howarth], Silas could have crooked his finger and had Nina back in a heartbeat. Even though he was never after Nina’s money, Maddy thought he was and the idea of him with his mitts on Nina’s fortune could drive Maddy to kill.

Here’s how it could have gone down. Madeline came to see Silas at his place to try and find out what he was planning in terms of a confession to the kidnapping of baby Avery. Madeline might have told him he shouldn’t risk his career by confessing since it’s no harm, no foul and the baby is back with her family. Then, Silas may have questioned why she cared since she hates him.

Then it dawned on him that Madeline is in on Ric’s torment games and is helping him make Nina think she stole the baby. With that, he goes for his phone to call Nina and rat out her mother when Madeline grabbed the knife out of the knife block, plunged it into his back and sashayed out of there in her designer high heels. Bam! Dead Silas. Then Nina finds him and all hell breaks loose.

We’ll see who it is, but Madeline is a strong choice both because she had multiple motives and because she’s a minor character that can be kicked to the curb at any time without causing storyline issues. They can kill her off for the murder or send her back to Pentonville or she can simply go on the lam and leave Port Charles to escape arrest. The latter two give the writers the freedom to bring her back later.

What do you think? Why would Madeline kill Silas Clay? Share your thoughts in the comments below.

We’ll discuss other possible culprits in future posts, so be sure to come back to Soap Opera Spy for more on the month-long General Hospital murder mystery.

‘The Young and the Restless’ Fashion: Get Sharon Newman’s Joie Blouse For Less – Sharon Case’s Style For Less!