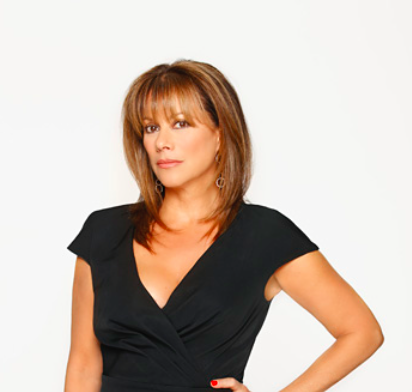 Viola Davis took home the highest honor on Sunday night’s Emmy awards for her work on “How to get away with Murder.” It wasn’t her award that was the talk of the evening. It was a Twitter frenzy created by “General Hospital’s” Nancy Lee Grahn after being upset by Davis’ acceptance speech.

Davis’ proud moment was an amazing win for African-American women. It was the first time a woman of color has won in 67 years. Viola Davis said in her acceptance speech, “In my mind, I see a line. And over that line, I see green fields and lovely flowers and beautiful white women with their arms stretched out to me over that line. But I can’t seem to get there no how. I can’t seem to get over that line.’ That was Harriet Tubman in the 1800s. And let me tell you something: The only thing that separates women of color from anyone else is opportunity. You cannot win an Emmy for roles that are simply not there. So, here’s to all the writers, the awesome people that are Ben Sherwood, Paul Lee, Peter Nowalk, Shonda Rhimes. People who have redefined what it means to be beautiful, to be sexy, to be a leading woman, to be black. A nd to the Taraji P. Hensons and Kerry Washingtons, the Halle Berrys, the Nicole Beharies, the Meagan Goodes, to Gabrielle Union. Thank you for taking us over that line. Thank you for the Television Academy. Thank you. ”

The acceptance speech triggered something in Nancy Lee Grahn, the “GH” actress who portrays Alexis Cassadine. She took a stab at her speech- and was not completely supportive of her win. Grahn often tweets about political and trending topics so her piping in on the issue was not all that surprising. It was a Twitter war that lasted almost 12 hours. 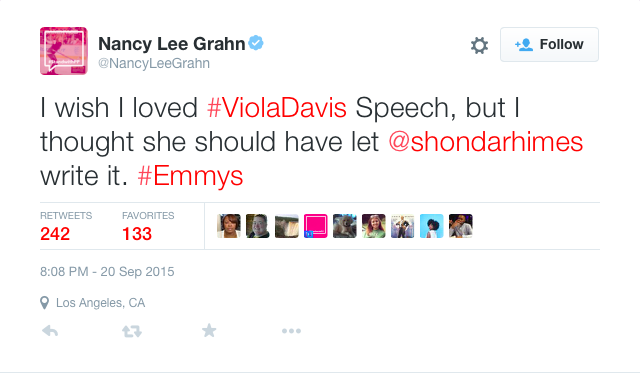 She tweeted that, “I wished I loved Davis’ speech. I thought she should have let Shonda Rimes write it.” She continued in another tweet that she wished she would have spoken to all women not just one race. She implied she felt the award ceremony was the wrong place to bring racism and real-world issues. At one point, she hinted that Viola Davis didn’t know what it was like to be truly discriminated against.

After a few hours, Grahn started apologizing for her insensitive comments. She seemed upset that others were misconstruing her comments. Emmy and Oscar’s winner, Patricia Arquette jumped on the bandwagon and told her that the win was Davis’, and she can say whatever she wants in her acceptance speech.

It seems like Nancy Lee Grahn may have been misunderstood. Do you agree with Nancy? Do you think she was being racist?

I never mean to diminish her accomplishment. I wish I could get her roles. She is a goddess. I want equality 4 ALL women, not just actors. — Nancy Lee Grahn (@NancyLeeGrahn) September 21, 2015

I apologize 2 anyone who I offended. I’m women advocate since I became one. After reading responses, I hear u and my tweet was badly phrased

30 yrs an advocate 4 human rights & now i’m a racist. Color me heartbroken. Twitter can bring out the best & sadly tonight the worst of us.

‘The Bold and the Beautiful’ Spoilers: Watch The B&B Video Preview For Tuesday September 22 – SEE IT HERE!