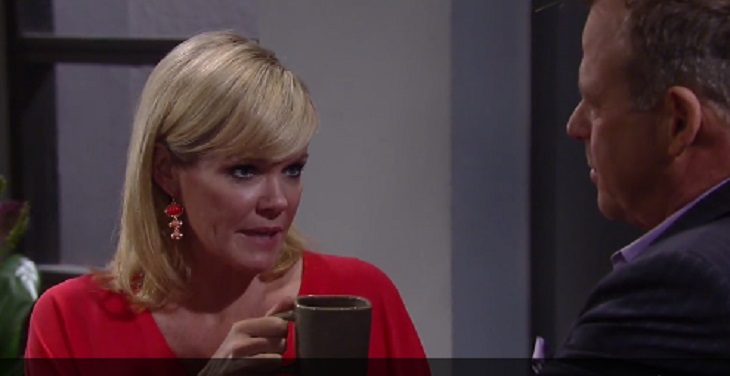 Ava Jerome [Maura West] is a newly single lady now that her boy-toy Morgan Corinthos [Bryan Craig] has dumped her and gone off to crazy town, so who will the newly minted lady mobster next turn to for love? This ‘General Hospital’ spoiler takes a look at the likely candidates for love – and be sure to vote in the poll below!

We can’t totally discount Morgan as a revived love interest for Ava. After all, Morgan is drawn to her, even when she’s disguised as Denise DeMuccio, and even though she’s the mother of his off-and-on again girlfriend Kiki Jerome [Hayley Erin]. Right now, Morgan is embroiled in unraveling mentally. If he ever gets medicated and on the straight and narrow, he might not want Ava because he’ll see being involved with her is self-destructive. But since Morgan has proved resistant to treatment so far, he may yet be open to enjoying the charms of the troublesome Ava.

This is one of I’ve got my fingers crossed will come to fruition. Scotty Baldwin [Kin Shriner] has already made a couple of interesting comments indicating he finds Ava sexy. And when he got the charges dropped against her in the Connie Falconeri murder case, Ava jumped into a hug with him and Scotty held on way longer than was appropriate for a lawyer. Scotty leaned into that hug and was rubbing all over her back so… Yeah. Looks juicy. Scotty is currently unattached and it looks like he’ll continue on as Ava’s lawyer so this makes him a good prospect for love.

Surprised to see Sonny Corinthos’ [Maurice Benard] brother on the list? Don’t be. Ric loves to play dangerous games and Ava’s the most dangerous game in town right now. Plus, with Michael Quartermaine [Chad Duell] in charge of Sonny’s mob, Ric feels disenfranchised. He may turn to Ava to play spy for Sonny to get back in his good graces – or because Ric wants to make Mikey look incompetent. Ric may feed info to Ava to set up Michael for failure. We know there’s no level Ric won’t stop to – and his latest hook-up Madeline Reeves [Donna Mills] is in jail – so he’s available.

There’s nothing quite like mixing business and pleasure and that means Ava could be a desirable sexual conquest for Paul Hornsby [Richard Burgi] that could turn to romance. If Paul is capable of trying to kill Sonny in cold blood and lying to his son Dillon Quartermaine [Robert Palmer Watkins] and ex-wife Tracy Quartermaine [Jane Elliot], he wouldn’t think twice about shagging Ava while still getting cozy with Tracy. Ava may also give Paul a go to try and use her wiles to influence him and get a better deal from him – or so she can get information to betray him. This is one to watch.

This one may also have you wondering why we put him on the list. But consider this. Ava has seduced Morgan and Sonny, so is it out of the realm of possibility that she would try and bed the oldest Corinthos son to make it a trifecta conquest? Plus, as we wrote recently, Michael is growing dark now that he’s taken over his dad’s syndicate and he’s channeling Sonny significantly. If Michael is willing to play hardball and take on the Corinthos enemies, he might also be willing to bed Ava. Unlike with Sonny and Morgan, though, Michael wouldn’t shag her due to loss of control, but as a power move.

Now you’re thinking – how can Ava romance a dead man? Hmm… Dead isn’t often truly dead in Port Charles and Carlos Rivera’s [Jeffrey Vincent Parise] shooting could have been a set-up between Kyle Sloane [Robb Derringer] and Carlos in order to get leverage over Anna Devane [Finola Hughes]. There are rumors swirling that Carlos may be alive and already back in Port Charles making trouble. And with Sabrina Santiago [Teresa Castillo] pregnant with Michael’s child, Carlos will have to give up on her, so he might be open to a romance with Ava who in turn would want to use Carlos as her assassin.

This is another crazy outlier option – but there is some method behind this madness. Ava obviously likes younger men and Dillon is trying hard not to act on his feelings for Lulu Spencer [Emme Rylan] because he doesn’t want to break up her marriage. That means a romance with a sexy older woman could be a tempting distraction. And Ava would be down for getting involved with Dillon simply because he’s Paul Hornsby’s son. Much like Ava did to Sonny by getting involved in Morgan, controlling the son can allow her to influence the father’s behavior.

So what do you think? Who is most likely to be Ava’s next lover and romantic partner? Maura West told Soaps in Depth that “What Ava really needs is love” and is hoping her new storyline will include a new man in her life. Vote below on who you think will be Ava’s next love interest and share your thoughts on why in the comments below!

‘The Bold and the Beautiful’ Spoilers: Watch The B&B Video Preview For Tuesday September 29 – SEE IT HERE!

‘The Bold and the Beautiful’ (B&B) Spoilers: Bill Wonders What Crazy Quinn Will Do Next – Thomas’ Encounter with an Intern Causes Trouble