‘Days of Our Lives’ Spoilers: Jennifer Presses Eve to Tell Paige the Truth – Sonny Leaves Salem, Can Marriage To Will Survive Split? 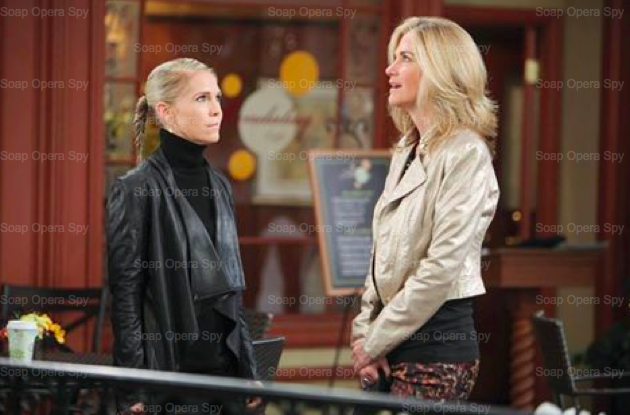 “Days of Our Lives” spoilers tease that we’re in for another week of secrets and shock. When Jennifer (Melissa Reeves) walks in on Eve (Kassie DePaiva) and JJ (Casey Moss) in bed together, she’ll fly into a rage and demand that Eve tell Paige (True O’Brien) exactly what’s been going on. A tearful Eve will beg her to keep quiet about what she knows, but the latest “Days of Our Lives” spoilers video hints that Jennifer won’t back down easily. A showdown in the square may lead to a revelation that Paige never saw coming. Jennifer’s anger may force Eve to spill the whole story and Paige probably won’t take the news well. However, Jen has shown she cares about Paige and it’s possible that she could have a change of heart. Will Jennifer make the truth known at any cost or will she protect Paige from being hurt any further? We’ll have to wait and see, but DOOL fans won’t want to miss a minute as Jen goes into full-on “mama bear” mode.

While Eve and JJ try to make sense of their mess, Will (Guy Wilson) and Sonny (Freddie Smith) will struggle with issues of their own. “Days of Our Lives” spoilers indicate that Sonny will tell Will he needs some time away from Salem to think things over. Sonny will take a trip abroad to see his brothers, but the latest “Days” rumors say he won’t be gone too long. Still, even a brief break for “WilSon” could be a disaster. Will and Sonny’s marriage first fell apart while Will was working in Hollywood. Plus, Paul (Christopher Sean) is still in town and that could mean more temptation for Will. Even after a few weeks away, it’s tough to believe that Sonny could just forget about Will having an affair with his ex. Check out DOOL in the coming weeks to see if time can really heal Sonny’s wounds.

So “Days” fans, what do you think about the news that Eve may be the one who tells Paige about her affair with JJ? Would Paige ever be able to get over something like that? What about Sonny’s departure from Salem? Is it a good idea for Sonny to clear his head or will it just mean more problems for “WilSon”? Where does Paul fit in all of this? Let us know what you think in the comments below and don’t forget to check Soap Opera Spy often for the latest “Days of Our Lives” spoilers, rumors and news.

‘The Young & the Restless’ Spoilers: Neil Lashes Out At Family in Drunken Tailspin, Drags Nikki Down With Him