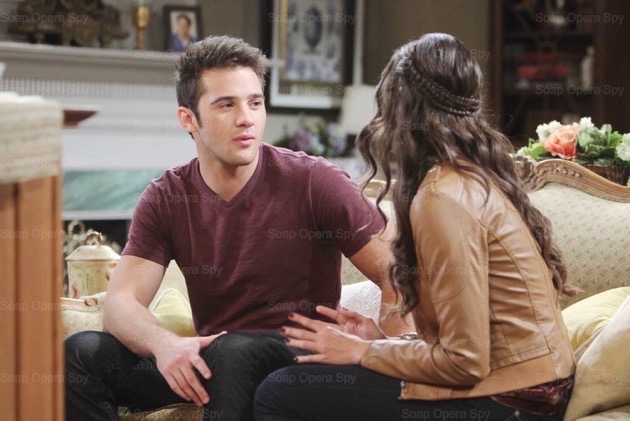 “Days of Our Lives” spoilers tease that Eric (Greg Vaughan) will finally start to realize that something’s up with Serena (Melissa Archer). Despite Nicole’s (Arianne Zucker) repeated attempts to clue him in, Eric has been content to believe that Serena is just a doting, muffin-making girlfriend. However, it looks like Eric could soon change his mind. “Days of Our Lives” spoilers indicate that Eric will overhear a tense conversation between Xander (Paul Telfer) and Serena. It’s not clear how much Eric will learn, but it should be enough for him to realize that there’s more to Xander’s visit than he claims. It seems likely that Eric will be tipped off to idea that Xander and Serena are keeping something from him. It’s only a matter of time before Eric finds out Serena was just playing him to get her hands on the diamonds. Many DOOL fans are hoping that Nicole will be responsible for the big reveal. It’s only fair since Nicole knew Serena was up to no good from the moment she arrived in Salem. Once Eric gets updates on Serena’s lies, will he apologize to Nicole for doubting her judgment? The rumors say this could be a new beginning for “Ericole.” Stick with “Days” in the coming weeks to watch the fallout of the elephant debacle.

Eric isn’t the only Salemite that’s about to get shocked. “Days of Our Lives” spoilers hint that Paige (True O’Brien) will be stunned by something she discovers in Eve’s (Kassie DePaiva) apartment. The question is: what will it be? It could be something that relates to Eve and Cole’s (Riley Bodenstab) plan to sabotage Paige and JJ’s (Casey Moss) relationship. Then again, it might be something JJ left behind after hooking up with Eve. At this point, no one would be surprised if Eve and JJ went at it again. In that case, Paige’s shocking discovery could be finding JJ and Eve in bed together. While it would be fun to see Paige catch them in the act like Jennifer (Melissa Reeves) did, it looks like DOOL writers may want to drag this out a little longer. Still, Paige will be one step closer to putting it all together. Stay tuned to the NBC soap to see how Paige will get the heartbreaking news that JJ cheated on her with Eve.

So “Days” fans, what do you think about Eric’s realization that Serena and Xander are up to something? When all of this is over, will Eric and Nicole find their way back to each other? What will stun Paige in Eve’s apartment? Will JJ and Eve end up sleeping together again at some point? Let us know what you think in the comments below and don’t forget to check Soap Opera Spy tomorrow for the latest “Days of Our Lives” spoilers, rumors, updates and news.