‘Days of Our Live’ Spoilers: Paul Gives John Shocking Clue About His Past – Eduardo Has Surprising Suggestion for Eve 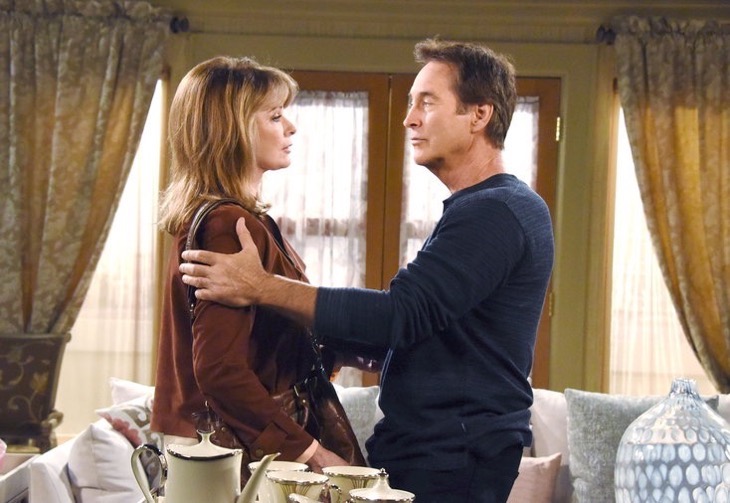 “Days of Our Lives” spoilers reveal that John (Drake Hogestyn) will receive shocking news. When John was kicked out of the ISA, he lost all the valuable resources he’d been using to learn more about his family. John probably figured his quest to trace his roots would have to go on the backburner. However, it looks like Paul (Christopher Sean) will manage to help his dad out. After all, Paul is a part of John’s family as well. This father and son will undoubtedly bond through their adventure.

John has already found some clues that are related to Winterthorne Academy and DOOL spoilers say Paul will give him another one. It appears John’s heritage could be tied to someone in town. Paul will show John that there’s a link between Winterthorne and a person in Salem. John’s backstory has been rewritten many times over the years, but maybe we’ll finally get a definitive answer about where John came from.

It could take a while to reach a conclusion, but “Days” writers are setting up a way to give John closure on his past. Perhaps John and Steve’s (Stephen Nichols) new partnership as private investigators will help as John continues to search for answers. Whatever the case, most viewers are excited to see what storylines the Black Patch firm will bring.

Other “Days of Our Lives” spoilers tease that Eduardo (A Martinez) will have a surprising suggestion for Eve (Kassie DePaiva). Things have been hostile between these two since Eduardo showed up in town, but Eve seems to be softening slightly. Eve is pursuing a relationship with Justin (Wally Kurth) and she’s learning to cope with the loss of her daughter.

As for Eduardo, he’s mainly focused on making amends with his loved ones. Maybe Eduardo’s offer will have something to do with honoring Paige’s (True O’Brien) memory or trying to make up for his mistakes. DOOL rumors hint that Eddie will be full of surprises over the next few weeks. Stick with “Days of Our Lives” for updates on Eduardo’s secrets.

So “Days” fans, what do you think about the news that Paul will help John learn more about his past? Are you glad they’re solving this puzzle together? What about Eduardo’s suggestion? Will Eve be on board with her ex’s idea? Let us know what you think in the comments below and don’t forget to check Soap Opera Spy often for the latest “Days of Our Lives” spoilers, rumors, updates and news.