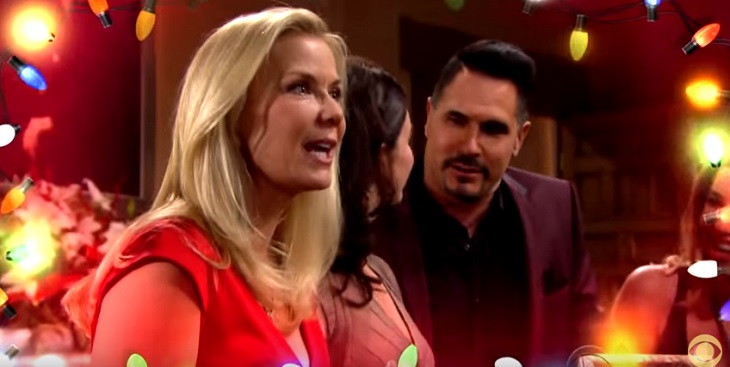 “B&B” spoilers tease that Rick (Jacob Young) will feel a little upset about leaving Brooke (Katherine Kelly Lang) by herself on Christmas. Rick and Maya (Karla Mosley) wanted to do something nice with the Avants this year, but it appears Brooke will miss out on the family vacation in Hawaii. Fortunately, Eric (John McCook) will soon step in and prevent Brooke from spending the holidays alone. If Brooke has the opportunity to be around people she loves this Christmas, she might as well take advantage of it.

Meanwhile, Bill (Don Diamont) and Katie (Heather Tom) will have a heartfelt chat. Katie has been pretty forgiving of Bill’s antics over the years. Brooke’s behavior certainly contributed to the chaos, but Katie will believe that’s all water under the bridge. It looks like Katie feels confident that Bill is devoted to her. “B&B” spoilers say Katie will suggest that everything is in the past and she’s not worried about history repeating itself.

Could that statement come back to haunt Katie? B&B spoilers indicate that trouble is brewing for Bill and Katie’s relationship. We know that Brooke will reunite with her true love eventually, but we don’t know exactly who that might be. Katherine Kelly Lang has mentioned in interviews that she’d like to see Brooke find romance with Bill again. Of course, we’ve also been watching Brooke and Eric grow closer. Ridge (Thorsten Kaye) shouldn’t be counted out just yet either. The rumors hint that anything can happen down the road.

Elsewhere, it seems Ivy’s (Ashleigh Brewer) future with Wyatt (Darin Brooks) could be in jeopardy. When Ivy said she really wanted a life with Liam (Scott Clifton), Wyatt was eavesdropping at the door. “B&B” spoilers reveal that Wyatt will ask Liam for his opinion on what to do about Ivy. Will Wyatt play dumb or come clean about what he knows? Stick with the CBS soap for updates on Wyatt’s next move.

So B&B fans, what do you think about the news that Rick will feel blue about leaving Brooke behind? Which one of Brooke’s many loves will win her heart once again? Will Wyatt try to hold onto Ivy? Let us know what you think in the comments below and don’t forget to check Soap Opera Spy often for the latest “B&B” spoilers, rumors, updates and news.