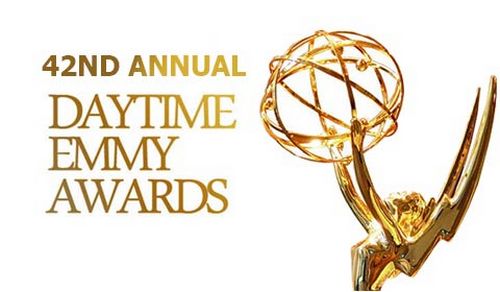 The POP Channel, formerly known as the TV Guide Network, will air the awards live on both coasts and feature tons of fan favorite talents. On April 26th, fans can watch the cast members and behind-scenes producers, writers, directors, and crew from General Hospital, Days of Our Lives, The Young and the Restless, The Bold and the Beautiful enjoy the night. You can find a full list of the 42nd Annual Daytime Emmy Pre-Nominations by clicking HERE…

The event will be hosted at a soundstage on the Warner Brothers lot. The goal is to bring back some classic feeling to the show and create a memorable environment. David Michaels, senior executive director of the Daytime Entertainment Emmy Awards, explained, “We’re briging back the Hollywood glamor. We want to give fans the kind of show that they will love.“

Bob Mauro, the newly appointed president of NATAS, added, “We’re turning the page back to the glamor days of daytime TV. This show will be produced on a soundstage where everybody in that room has worked at one time or another. It will be a throwback to old Hollywood.”

The new POP channel home will be a great fit for the Daytime Emmy Awards. The awards were only available for viewing via live stream last year. Since POP airs daily reruns of “The Young and the Restless” and “The Bold and the Beautiful,” the fellow CBS network will be ideal.

You’ll have to wait until the official noms are revealed on March 26th, but who do you think will take home an award SOSers? Who are your favorites for the win? Share in the comment section below!