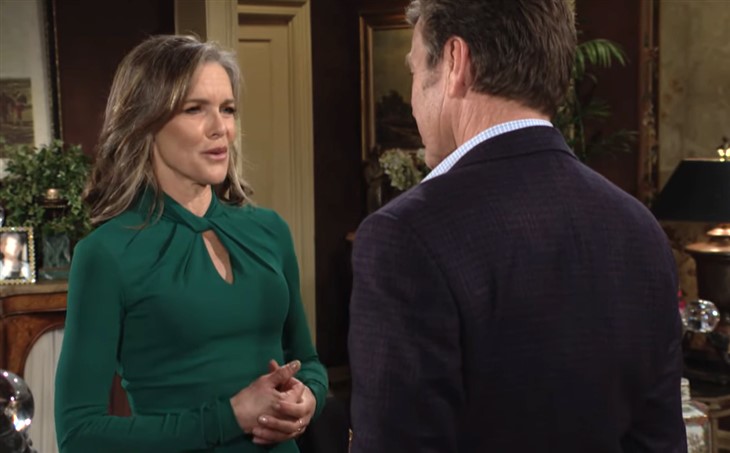 The Young and the Restless (Y&R) spoilers for Monday, January 23, 2023, reveal Jack deciding he really, really wants Diane, but does Diane want him?

The Young And The Restless Spoilers – Diane Jenkins Hits The Brakes

Diane Jenkins (Susan Walters) and Jack Abbott (Peter Bergman) have been growing closer for the better part of the year. Of late, they have also shared a few passionate moments initiated by Jack. Before, Diane would fantasize about Jack kissing her, but now he wants her for real and wants her bad.

On Monday, the pair nearly fall into bed together, but Diane stops Jack. Is she not ready? Does she trust that he really wants her and isn’t still pining for Phyllis Summers (Michelle Stafford)? She doesn’t want to get hurt again but she might have no choice but to just follow her feelings and see what happens.

Nikki Newman (Melody Thomas Scott) knows Diane and Jack have been up to something with Jeremy Stark (James Hyde) and her necklace but now she knows what that something is and is absolutely livid that she wasn’t let in on this grand plan.

She is still not sure that she can trust Diane, especially as she is her mortal enemy whom Nikki once believed she had murdered. However, that might not make a difference here as she wants to run Jeremy out of town more than she ever wanted to run Diane out of town. What a quandary that Nikki is in. Will she go see Jack and Diane again to try to fix this mess for herself?

Spoilers say that The Great Victor Newman (Eric Braeden) seizes quite an opportunity. Is this a get-richer-quick opportunity or something else? Victor wants both Jeremy Stark brought down and Adam Newman back in the family and company fold.

We know that Victor will go for it with either of these chances because he is ruthless and always goes after what he wants. However, when he does that, he typically causes trouble for someone else so who will end up with more problems than they want this time? Stay tuned to The Young and the Restless weekdays to see how these stories play out.

We would love you too SUBSCRIBE to Soap Opera Spy’s FREE newsletters.  It will be sent to your email inbox twice daily, once at 9:30 AM EST and the other at 6:00 PM EST.

Additionally, you can sign up for Celebrating The Soaps new post FREE notifications which sends a notification to your cell phone when a NEW post goes up.   You will never miss anything that way! You can easily UNSUBSCRIBE HERE!

We LOVE hearing from our fans so please leave us a comment about the show or this article, below!

Days Of Our Lives Spoilers: Sarah Tries Desperately To Save Marlena

B&B Spoilers: Did Sheila Hurt Deacon The Most?