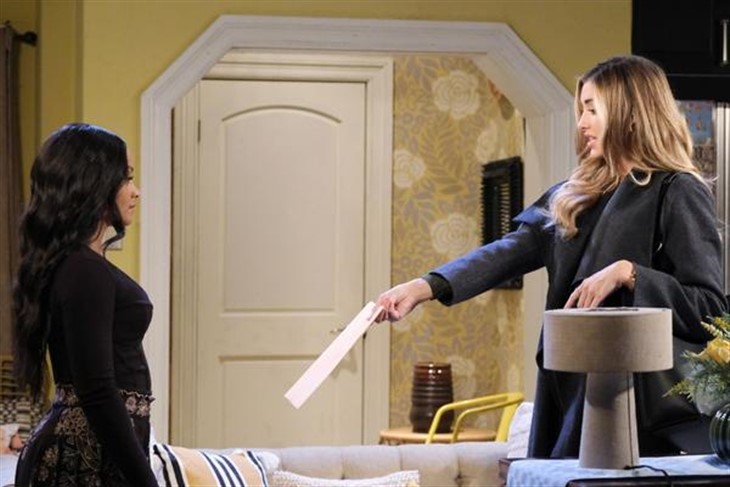 Days of Our Lives spoilers tease is quite proud of the fact she had made a fortune over the years. Paulina grew up poor and she vowed someday she would become a very rich woman. She learned that the real estate business suited could be very lucrative. She worked very hard and adopted a shrewd persona. It all worked and Paulina was now a very rich woman. Paulina gave her daughter Chanel DuPris (Raven Bowens) whatever she wanted growing up.

Days Of Our Lives spoilers – Chanel DuPris Takes Her Mother’s Wealth For Granted,

Chanel’s behavior since she moved to Salem has shown that in many ways, she has adopted many of her mother’s best behavior. Along with her partner Allie Horton (Lindsay Arnold) is the owner of Sweet Bits, a very successful bakery located in Horton Square. But there are times when Chanel comes across as entitled. Viewers may remember that Paulina had finally cut Chanel off financially. Chanel befriended complete stranger Claire Brady (Isabel Durant) and offered to pay for an expensive bottle of champagne for them both. By the time the check came, Chanel disappeared leaving with the bill. Once Paulina realized what Chanel had done, she paid Chanel’s debt.

DOOL Spoilers – Paulina Price Is Used To Buying Her Way Out Of Anything.

That certainly wasn’t the first time that Paulina threw money around to get Chanel out of some serious trouble. Chanel had an affair with one of her married professors. Unfortunately, the Professor’s wife discovered that Chanel was sleeping with her husband and lured Chanel to a remote rooftop on campus. The two women went at it and Chanel became afraid that the woman brought her there just to kill her. Chanel wasn’t about to let anyone kill her and she fought back. The Professors wife was the one who died after Chanel pushed her away,

Days Of Our Lives Spoilers – The Cover-up.

Paulina heard about what happened to Chanel and rushed to the campus to provide Chanel with as much love and support as she could. Paulina paid the campus a large sum of money and Chanel didn’t face criminal charges. Sloane Peterson (Jessica Serfaty), who is new to Salem as well, revealed to Paulina and Chanel that it was Sloane’s mother who confronted Chanel that night and died.

Sloane tried to have the women arrested. But after discovering that no charges were going to be filed against either mother or daughter. So now Sloane just served Chanel with a lawsuit. Naming both Paulina and Chanel as defendants, Sloane plans to take Paulina’s entire fortune from her. And given the facts of the case as presented, Sloane might get the last laugh after all.

Does Chanel have a case against Paulina and Chanel in Civil Court? Will Sloane end up with Paulina’s entire fortune? Will Chanel realize she can’t always buy herself out of trouble? Anything can happen in Salem so stay tuned to Days of Our Lives streaming every weekday on Peacock. And don’t forget to check back right here regularly for all your Days of Our Lives news, information, and spoilers!

Y&R Spoilers: Nick Asks Sally If Her Baby Is His– Does He Suspect Adam Is The Baby Daddy?