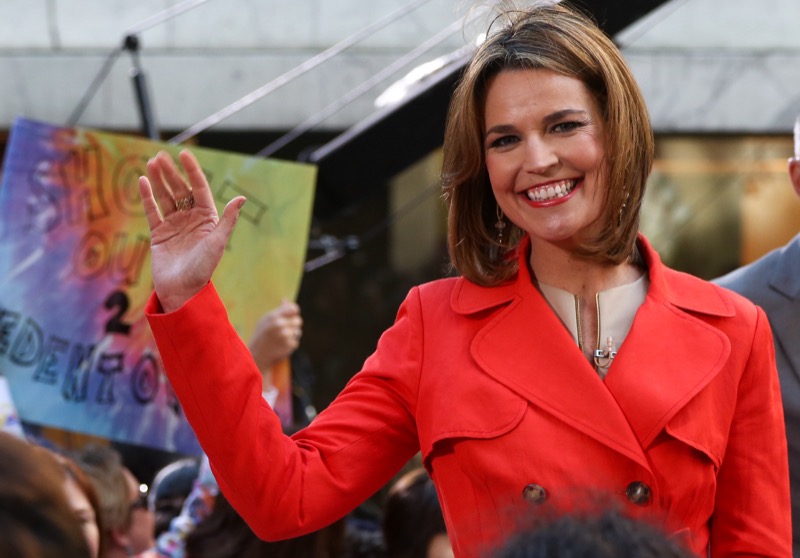 This alleged feud between Savannah Guthrie and Hoda Kotb began since June two months ago, a source had revealed that indeed when it comes to Savannah and Hoda looks can be very much deceiving because though the two always appear all smiles and happy in their online pictures, the two can’t stand each other behind the scenes.

Recently, Savannah, posted series of photos featuring her, Hoda, and some other co-hosts online, and due to the ongoing feud speculation between Savannah and Hoda, fans tagged Savannah as fake, they say that the 50-year-old journalist is faking a smile and pretending like everything is cool between her and Hoda meanwhile, it’s no news that there’s a big issue going on between them.

I have to point out that Savannah has a lot of haters who don’t hesitate to show their anger and displeasure that the 50yr-old is still working on the Today show. You can’t blame them though, they have ample reason to hate her. The hatred is so real and massive that they don’t always mince words when saying that they always skip the morning show every time it was Savannah’s time to anchor the show.

After Savannah made that post that featured her and Hoda seating together few feet apart from each other, smiling, and her followers observed that she was being fake, some of her followers outrightly suggested that Savannah should leave the show. Mind you, this isn’t the first time fans have asked Savannah to leave Today show or suggest that Savannah be fired, it has actually become a norm for fans to say they want Savannah out of the show.

The thing is, fans didn’t just ask Savannah to leave, they wished she was fired so that Savannah would know that she’s “not all that.” After the pictures Savannah posted on Tuesday, a fan pointed out that Savannah have been making several uploads referencing to her times on air on the morning show, and suggested that as a farewell sign from Savannah that she would be leaving the show any moment.

Based on the recent back-to-back upload of pictures referencing Savannah’s days as a host on Today show, a fan commented “I assume you are leaving the show based on your recent posts,” but then, an angry fan said “Stop interrupting people and being rude. You ain’t all that. You need to go.”

Another fan painfully expressed how Today show used to be the best morning show for him but due to Savannah’s behavior lately, he no longer finds it cool to watch. A Twitter user then said, “I’m so sick of Savannah Guthrie being rude, loud, always interrupting and talking over everyone. Love everyone on the show but she needs to GO!”

Amid the feud going on between Savannah and Hoda, it didn’t stop Savannah from posting series of pictures of Hoda during Hoda’s birthday and wishing the 57yr-old a happy birthday, but, trust haters/critics to stick around just to sniff out the “fakeness” and “realness” in the uploads. Since most fans side with Hoda, some went to the post to tell Savannah to learn to be more like Hoda, someone wrote, “She’s one class act! Beautiful in & out. Doesn’t have to try hard. Take notes Savannah!”

Be sure to catch up on everything happening with Today Show right now. Come back here often for all Today Show’s spoilers, news, and updates.