The Bold And The Beautiful Spoilers: Steffy Checks In From Europe, Gratitude And Appreciation 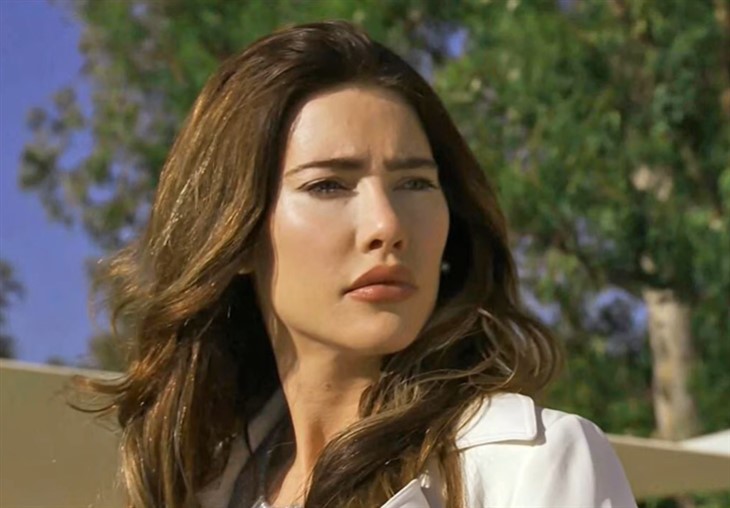 The Bold and the Beautiful spoilers for the week of June 13 reveal that Steffy Forrester Finnegan (Jacqueline MacInnes Wood) checks in from Europe. This might be a phone call or maybe fans will see a video chat. It is teased that Steffy will be full of gratitude and appreciation for her loved ones. However, Steffy will still be in deep mourning.

The Bold And The Beautiful Spoilers – Temporary Exit To Europe

B&B spoilers reveal that Steffy tried to go back to work after John “Finn” Finnegan’s (Tanner Novlan) “death.” Even though Finn survived the shooting, Li Finnegan (Naomi Matsuda) hasn’t told anyone. Believing her husband is dead, Steffy decided to take Hayes Forrester Finnegan (Piper Harriot) and Kelly Spencer (Sophia Paras McKinlay) to Europe for a while.

While Steffy is in Europe, Finn wakes up from his coma. However, Li isn’t the only one to watch Finn open his eyes. Sheila Carter (Kimberlin Brown) is also present, which confirms the villain escapes from prison. While many fans don’t understand why Li would allow Sheila to be there with Finn, blackmail and threats are likely involved.

Li didn’t just commit a cruel and immoral act by hiding Finn’s survival. Li broke her oath as a doctor and broke the law. Li forged Finn’s death certificate and intentionally misled the police. Plus, we are pretty sure smuggling a comatose patient from a hospital to a random hotel room is illegal, too.

Sheila will probably use Li’s crimes to blackmail her into not calling the police and allowing her to see Finn.

The Bold And The Beautiful Spoilers – Steffy Forrester Finnegan Checks In

The Bold and the Beautiful spoilers for Wednesday, June 15 reveal that Steffy checks in with her loved ones. It is stated that Steffy thanks her friends for their support. So, it sounds as if Steffy talks to several people, not just Ridge Forrester (Thorsten Kaye), Taylor Hayes (Krista Allen), and Thomas Forrester (Matthew Atkinson).

Steffy will likely update everyone on how her grief is going. Steffy is seeing a counselor in Europe. However, will anyone tell her that Sheila escaped prison? Ridge and Taylor might decide to keep that from Steffy so she can focus 100 percent on her healing. Taylor might think that any additional stress could be a setback for Steffy.

Plus, they don’t want Steffy to worry about what Sheila will do next. Since Steffy is halfway across the world, everyone probably thinks there is no way Sheila will find her.

It is teased that Steffy will be full of gratitude and appreciation. However, it doesn’t sound like Steffy will learn that Finn is alive. Apparently, Li and Sheila will focus on helping Finn heal from his injuries.

At some point, Li is going to have to tell Finn that Steffy thinks he is dead. How will Finn react to learning of his mother’s deception? Will Finn lash out at Sheila for being by his bedside? When does Steffy get to find out that her husband is still alive?