The Bold And The Beautiful Spoilers: Brooke Receives A Divorce Notice 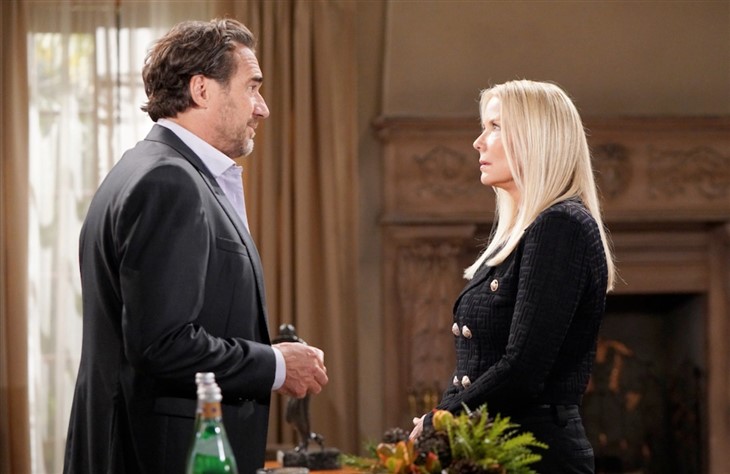 The Bold And The Beautiful Spoilers – Carter Delivers The Papers

Brooke Logan Forrester (Katherine Kelly Lang) is still in a state of shock that her marriage seemed to end so abruptly when Ridge Forrester (Thorsten Kaye) took off to Aspen and decided that he wanted to spend his life with Taylor Hayes (Krista Allen) now. However, it becomes much more real for her on Wednesday when Carter Walton (Lawrence Saint-Victor) stops by to deliver official divorce papers.

Brooke has been down this road countless times before with Ridge but this might be the real end, and maybe it should be when she learns the real reason he left her. While she does not want a divorce, at least Brooke still has men who want her. She turned Deacon Sharpe (Sean Kanan) down flat, but Dollar Bill Spencer (Don Diamont) has already let his intentions be known and he is willing to wait for her until she is ready to be in a relationship once again. Will that happen sooner rather than later?

B&B Spoilers – Ridge Has An Announcement To Make

Ridge is forging full speed ahead with his newfound alleged happiness with Taylor. They are now living together in a beach house she just bought and now Ridge has a huge announcement. Rumor has it he will be a groom in a wedding this fall, so are he and Taylor planning to marry?

That might be a big reason why he had Carter deliver those divorce papers to Brooke so quickly. Then again, he still doesn’t know he only left Brooke because Thomas Forrester (Matthew Atkinson) set her up to take the fall for that CPS call. When Thomas hears that his parents are getting remarried, will he feel the guilt and eventually fess up or will he just go on pretending he didn’t really do what he did?

When the truth does eventually come out, the fallout will affect everyone’s lives around him, including his own. He might have Hope liking him now, but it won’t last long. Stay tuned to The Bold and the Beautiful weekdays to see how these stories play out.

The Young And The Restless Spoilers: Sally Makes A Decision, But What About Abby And Devon?