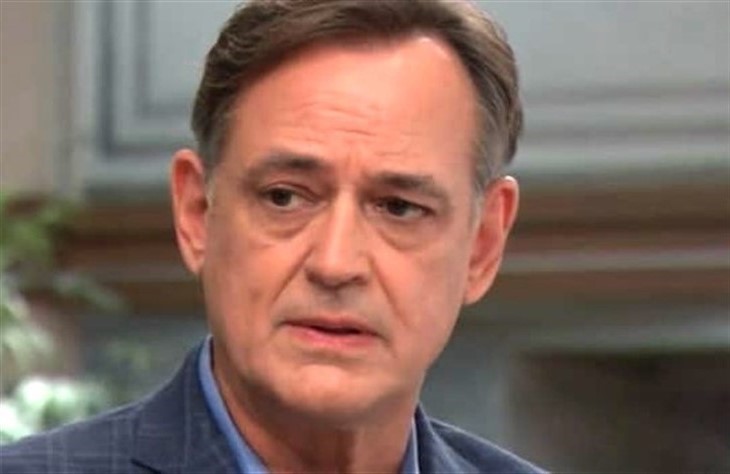 General Hospital (GH) spoilers tease that Dr. Kevin Collins (Jon Lindstrom) has no idea that his twin brother, serial killer Ryan Chamberlain (also Jon Lindstrom) has been faking his injuries for quite some time now. As viewers may recall, Ryan was stabbed in prison and almost died. He survived the attack, but seemed to have what is known as “locked-in syndrome”. As far as anyone knew, Ryan was awake but unable to move except to blink his eyes. He could still feel pain, but was unable to express it, not even able to speak. But Ryan has been faking for quite some time, if not from the beginning.

Last year, Esme Prince (Avery Kristen Pohl) arrived in Port Charles along with her boyfriend Spencer Cassadine (Nicholas Chavez). Esme took an intern position at Spring Ridge, where Ryan was kept. He was moved to a low-security prison after the stabbing since he supposedly couldn’t move. Esme took every opportunity to visit Ryan, which alarmed Kevin. Worried about Ryan’s influence on Esme, Kevin restricted all visitors to Ryan. He visited Ryan himself, but was ignored even though Ryan had taken to communication through blinking his eyes!

What Kevin doesn’t know is that Ryan is actually Esme’s father. The whole reason she befriended Spencer and insinuated herself into his life was at Ryan’s instruction. Ryan planned to use Esme to break up the marriage of Nikolas Cassadine (Marcus Coloma) and Ava Jerome (Maura West). Ryan is still infatuated with Ava. At first, Ryan encouraged Esme to convince Spencer to stalk Ava by sending her creepy gifts with the intent it would scare her into leaving Nikolas. When that failed, Ryan tasked Esme to seduce Nikolas. Esme is still trying to make that happen.

Kevin still has no idea that Esme is his niece. Nor does he know that Ryan is faking the “locked-in syndrome.” Ryan is biding his time, waiting for the right time to escape Spring Ridge and get revenge on all of his enemies, which would presumably include his twin brother. While the walls have begun to close in on Esme, will Kevin discover her true identity and convince the infatuated young woman that Ryan is dangerous. Or is Esme too far gone?

Will Kevin figure out that Ryan is faking? Can he convince Esme that Ryan is dangerous? Or will Ryan soon escape and begin a new reign of terror in Port Charles? Anything can happen in Port Charles so stay tuned to General Hospital airing weekdays on ABC. And don’t forget to check back right here regularly for all your General Hospital news, information, and spoilers!

Days Of Our Lives Spoilers: Kristen DiMera Is Back For Blood