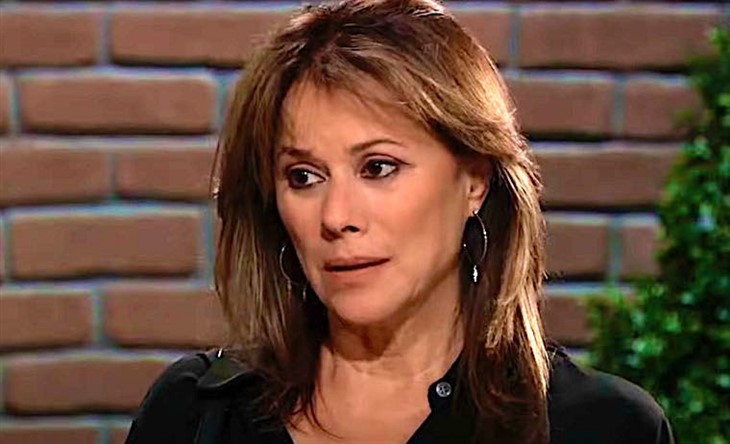 General Hospital spoilers reveal Jordan chastises Alexis when she wants to answer post an answer to “The Hook.” Alexis wants to draw the killer out into the open but isn’t having a lot of luck so far.

Alexis will approach Jordan and will be told to leave things alone, will Alexis stop there or put herself in danger by going after the attacker again?

Trina offers Josslyn some advice after her weekend with Rory Cabrera (Michael Blake Kruse). Josslyn feels herself drifting away from Cameron Webber (William Lipton) even after spending the night at his house recently.

However, Sam wants to know what else Cody has been up to in his life. Will Dante Falconeri’s (Dominic Zamprogna) secret be uncovered as well?

Scott Baldwin (Kin Shriner) thinks Cody is trouble, however, Britt Westbourne (Kelly Thiebaud) could defend him to Liesl Obrecht (Kathleen Gati). Britt knows there is more to Cody than meets the eye.

Will Liesl believe Britt? Will Scott back off of Cody or continue to berate him? Will Cody turn out to be Mac’s son after all?

Drew Cain (Cameron Matheson will give Carly Spencer (Laura Wright) some sound advice. However, is Drew’s advice more about saving himself and not Carly?

After all, Drew has already threatened Ned Quartermaine (Wally Kurth). Drew cannot let the truth about his and Carly’s relationship come to light until after he manages to get control of ELQ. Will Carly understand Drew’s dilemma?

Liz has just been told that she is responsible for Reiko Finn’s (Mele Ihara) fall done the stars years ago. Liz discovered her father’s affair with Reiko and pushed her.

Liz thought that Jeff Webber (William R. Moses) pushed Reiko down the stairs. Now that Liz knows the truth, how will she ever face Hamilton Finn?