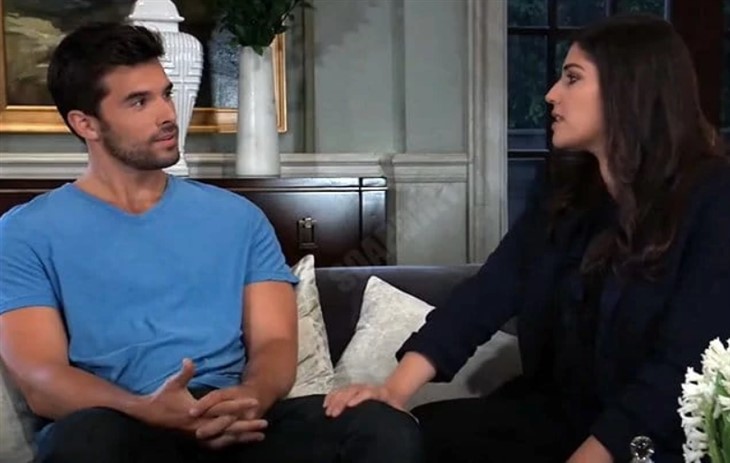 General Hospital spoilers for Thursday, August 17 tease there will be trusting talks and tension filled encounters ahead for the residents of Port Charles. Some will be encouraged while others will be discouraged and yet others will be frightened.

Brook Lynn Quartermaine (Amanda Setton) gives Harrison Chase (Josh Swickard) a surprise assist with his career and he asks her if she really believes in him. Brook Lynn will no doubt reassure him that of course, she believes in him or she wouldn’t want him pursuing a career singing her songs. It’s understandable that Chase may have his doubts, considering that this whole singing career thing started as a con to take down Linc Brown (Dan Buran).

Brook Lynn knows Linc is not going to give Chase any more of a good deal by managing him than he ever did her, and she doesn’t want Chase conned. It seems that Linc has made a few big stars with him managing them but he always screws them over.

Dr. Hamilton Finn, (Michael Easton) has a talk with his father, Dr. Gregory Chase (Gregory Harrison) obviously very worried about Elizabeth Baldwin (Rebecca Herbst). In spite of Elizabeth not wanting him discussing her panic attacks and post-traumatic stress flashback symptoms with anyone, again he oversteps, although he means well. Liz had frozen on the same staircase where he threw Peter August (Wes Ramsey) down, and she had flashbacks of Peter and herself as a child. Finn tells his father that he is not just going to stand by and watch her fall apart.

Elizabeth herself is still very resistant to the help of others, as she has stepped into a room at GH and says it’s best to stay out of her business. Unfortunately, she again is triggered by another traumatic memory and things can only go downhill from there. Even though Finn is probably not the best person to advocate for her or try to convince her there’s something wrong this incident is bound to prove him right.

Her flashbacks will only get more intense in the next weeks, and this latest may be only the tip of the iceberg. Whatever happened to her has been repressed for a very, very long time.

At the Metro Court, Valentin Cassadine (James Patrick Stuart) stands up to his father, Victor Cassadine (Charles Shaughnessy) and gives him a warning. He asks the elder Cassadine what it’s going to take to get him to stand down? Valentin is trying to convince Victor that Anna Devane (Finola Hughes) and their relationship is not a problem. It’s doubtful that Valentin will be able to convince him of that, however.

Victor likely has a valid point about Anna continuing to cause problems, as she gets in Lucy Coe’s (Lynn Herring face. Anna is downright threatening as she asks Lucy if she really wants to do “that”. Previously, Anna had leaned on Lucy’s boyfriend and Valentin’s attorney, Martin Grey (Michael E. Knight) for inside information Valentin may have shared with him, but not with her. Anna is suspicious of Valentin’s activities since she found out he was not in the rehab as long as he claimed to be, recovering from that serious infection.

Viewers remember he was nearly caught red-handed on a mission Victor sent him on to French Polynesia, to frame Jennifer Smith (Holly Gagnier) for Luke Spencer’s (Anthony Geary) murder. Felicia Scorpio (Kristina Wagner) saw him from a distance and thought something was familiar about that French Navy captain.

Anna and Victor aren’t the only suspicious ones in Port Charles; Dante Falconeri (Dominic Zamprogna) confronts someone with his suspicions. It’s likely his childhood camp friend Cody Bell (Josh Kelly) who he’s asking about what else he’s been hiding. Everyone in Port Charles is suspicious about Cody, and his recent revelations that he is Dominique Stanton Baldwin’s (Shell Danielson) son doesn’t make anyone trust him anymore. Cowboy Cody seems to be kicking up more dust-or should that be dirt-than anyone has for a while in Port Charles.

Scott Baldwin (Kin Shriner) doesn’t trust Cody either, even though he believes he was telling the truth about being Dominique’s son. But that looks like where his trust in Cody ends, as he warns Britt Westbourne (Kelly Thiebaud) she would be wise not to trust him. That won’t take much effort on Britt’s part, because she hasn’t trusted him since he first made that big splash at the Society Setups get together.

Britt is slowly warming up to Cody but she is still keeping both eyes firmly open. She’s taking the cowboy with a grain of salt the size of a horse pill.

Elsewhere, Cody has a confession to make to Olivia Quartermaine (Lisa LoCicero) who he refers to as “Mama Q”. He tells Olivia that he has something to tell her, and he looks very uncomfortable about the tea he’s getting ready to spill. She doesn’t have the most happy look on her face either, and no doubt wonders what he’s about to say. The tension that is obvious teases that whatever he’s going to tell her, it’s going to be a bombshell.