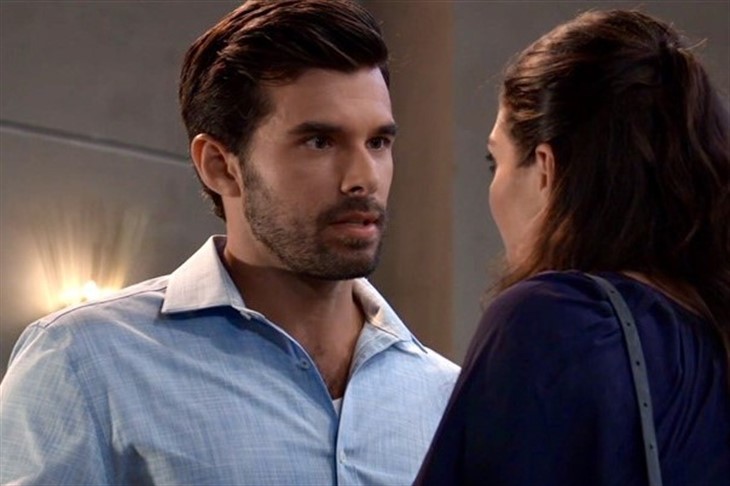 Chase talks to Brook Lynn Quartermaine (Amanda Setton) and wants to know if it’s still worth it going after Linc Brown (Dan Buran). They have gone to an awful lot of trouble for very little results, considering Brown dropped Chase’s contract anyway. They were trying to lure him into a trap by Chase signing a contract as a singer but he couldn’t even get the first show.

Now that Chase and BLQ have dropped the pretenses and started dating, is it worth it? Besides, her father Ned Quartermaine (Wally Kurth) has some reservations about their relationship.

In a room at GH, Elizabeth Baldwin (Rebecca Herbst) has some questions for Nikolas Cassadine (Marcus Coloma). She is reconsidering changing her story to the police about the night of Ava Cassadine’s (Maura West) attack, worrying her alibi will cause police not to find the attacker. She knows that if she tells the truth about not remembering what happened, she will give up both her and Nik’s alibis. It looks like she’s running it by Nikolas in trying to make up her mind, and asks him is that to protect her, or to protect him.

Stella looks ashamed as she talks to Jordan Ashford (Tanisha Harper) and Jordan asks Stella why is she bringing this up now? Viewers will remember – as Stella recently did- that she never mailed Jordan’s signed divorce papers because she wanted Jordan and Curtis to reconsider. But then she had a stroke at Kelly’s, and Cameron Webber (William Lipton) had thrown away the envelope, soaked with Stella’s coffee.

The memory started coming back to her at Trina Robinson’s (Tabyana Ali) party when she saw Portia Robinson’s (Brook Kerr) engagement ring. As a result, Curtis and Portia cannot marry because they are not divorced and Stella confesses what happened to Jordan.

At The Savoy, Curtis approaches an uninvited guest by the name of Selina Wu (Lydia Look) who is sitting by the bar. It seems like Ms. Wu wants more and more mob-related favors since he grudgingly agreed to let her run high stake poker games at the club. This was in exchange for Marshall Ashford’s (Robert Gossett) criminal records, which didn’t amount to much; he asks Selina what she is doing there and who she has a meeting with. She probably will not reveal a whole lot to Curtis, although it’s Cody Bell who has asked to meet with her.

Hamilton Finn (Michael Easton) worries about Elizabeth to his father, Gregory Chase (Gregory Harrison). He says he’s not sure that everyone has her best interests at heart, and thanks his father for his support. Finn is likely worried about Elizabeth’s friendship with Nikolas, who he encountered the night of the Quartermaine picnic with the two covering for each other.

With Ava’s attacker still loose, and Elizabeth coming out of the woods with blood on her face, everyone is a person of interest. Finn hopes to help Elizabeth get to the bottom of her issues and she’ll soon talk it over with him.

Sonny is at the General Hospital intensive care unit still visiting with Ava as she recovers from her brutal attack. Sonny continues to question her as to who he is protecting her from, and tries to get out of her who she thinks attacked her. With his henchman Frank (Frank Lyon) informing him Ava requested Nikolas not visit her, he’s got Nik in mind as his number one suspect. Sonny will continue to try to get the truth out of Ava, although she doesn’t know the truth because she didn’t see her attacker.

Cody has arrived to the meeting he requested with Selina, and he has a proposition for her. This comes after a lot of questions and worry about why Mac Scorpio (John J. York) wants to know so much about him. Of course he has no idea that Mac might be his birth father and that’s why he’s fishing, Cody’s afraid it’s for police purposes.

It should be interesting what Cody’s proposal to Selina is, and whether she’ll accept it. What could he possibly have that she could possibly want?

The Bold And The Beautiful Spoilers: Steffy Pushes The Parent Trap Envelope