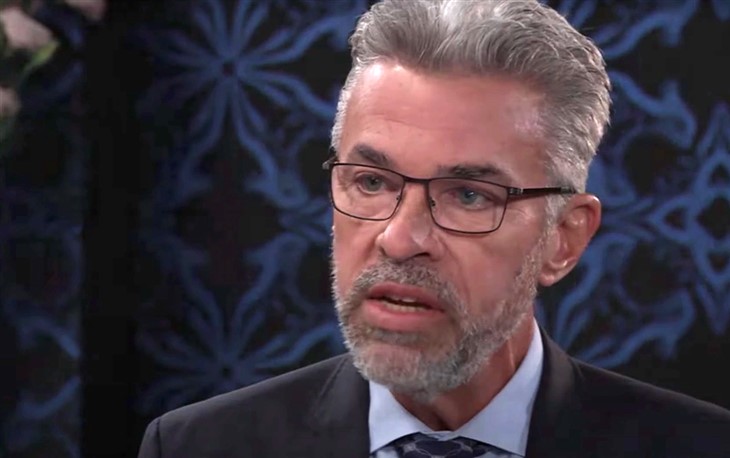 Felicia Scorpio (Kristina Wagner) seems to be daring Mac to investigate Cody Bell’s (Josh Bell) paternity as she asks him what he’s so afraid of. Mac worries that just knowing might be too high of a price, worrying he may just open up a can of worms. He’d expressed concern as to the effect it would have on Cody as well as on him earlier.

Mac had gone on a fishing expedition of sorts, disguising it as investigating Ava Cassadine’s (Maura West) attack, wanting to know what Dr. Britt Westbourne (Kelly Thiebaud) knew about Cody.

Earlier, Felicia had theorized that Dominque Stanton (Shell Danielson) might have been pregnant when Leopold Taub (Chip Lucia) put her in Shadybrook years ago; giving the baby to the Bells.

At GH, Maxie also wants answers from Britt, probably asking what she has learned about Cody. Maxie tells a surprised Britt she was starting to think she was wrong. Britt had agreed to a few more dates with Cody and has gotten to know him perhaps a little bit better.

She put a limit on all his questions about her father though and told him if he kept asking about Cesar Faison (Anders Hove) that was it. Britt is bound to wonder why everybody all of a sudden wants to know everything about Cody.

At the PCPD, Spencer Cassadine (Nicholas Chavez) attempts to reassure Officer Rory Cabrera (Michael Blake Kruse) that he has nothing to worry about. Spencer’s on his way to a three month stint in Pentonville Prison and is likely there awaiting transport.

Spencer figures that Rory must be wondering if he had that long conversation with Trina Robinson (Tabyana Ali) because he was trying to horn in on Rory’s action.

Spencer tells Rory that he has nothing to worry about, and as far as he knows, he and Trina are not even friends anymore although she apologized for that statement. Spencer had crashed Trina’s party and had a letter prepared to her explaining his plot to expose Esmé Prince’s (Avery Kristen Pohl) frame but snatched the letter back and burned it.

Someone’s asking Nikolas Cassadine (Marcus Coloma) some questions that are making him very uncomfortable, as he asks what the person is implying. He is quickly becoming the top person of interest in Ava Cassadine’s (Maura West) brutal attack, and Nikolas looks scared.

Ava even blocked him from her hospital visitor’s list and that is something that really makes him look bad; visitor’s lists aren’t covered under HIPAA laws so anyone can know.

Anyone in the vicinity of the attack scene, which was the deck of the Quartermaine boathouse could be a suspect even though the PCPD put out a crimestoppers type alert. Previously, Valentin Cassadine (James Patrick Stuart) and Alexis Davis (Nancy Lee Grahn) had a discussion about the crime and it may be Aunt Alexis who’s asking him questions.

However, Ava is burdened with the recent events surrounding herself, Esmé’s disappearance and her own attack. She’s pouring her heart out to a trusted friend and tells the friend that he or she deserves to know the truth.

This may be Sonny Corinthos (Maurice Benard) since they share a child together and it’s Sonny who has set up his people for her protection in the hospital.

Sonny had suspected that Ava had something to do with Esme’s disappearance, and she wasn’t forthcoming when he asked her. But since Esmé’s body has never been found, who knows but that she might be the one who attacked her, and Sonny should know.

Dante Falconeri (Dominic Zamprogna) and Sam McCall (Kelly Monaco) are at home talking about the crime, as Dante tells her Sonny isn’t the only one keeping an eye out. The police did put out a crimestoppers type alert for anyone that has any information about Ava’s attack that night, and the attacker is identified and arrested.

Until then though, the person of interest could be nearly anyone in Port Charles that was on the Quartermaine estate grounds the night of the picnic. The person may not have been invited, and the person may have left town but the search will go on until Port Charles and Ava are safe.

Cody’s worried as he asks someone if he’s going to need a lawyer, and that could be Selina Wu (Lydia Look). The last time he saw her was when she had him beat up for winning the pot at her poker game.

But now he will have a proposition for her, possibly concerning some information he may have.

This encounter with Selina may be more civil, but perhaps all she wants is to distract Britt away from her nephew. Selina had done everything she could to break up Britt’s and Brad Cooper’s (Parry Shen) friendship.

Sonny’s obviously suspicious of Victor Cassadine’s (Charles Shaughnessy) involvement with either Ava’s attack or Esme’s disappearance as the two meet at the Port Charles Grill. Victor may not be so jovial and charming when Sonny tells him he wants to know how he cleaned something up.

There was no evidence left at the scene of Ava’s attack forensic or otherwise, with the attack weapon still missing.

Sonny is putting the pieces of the puzzle of Ava’s attack and Esme’s disappearance, and as far as he’s concerned all roads lead back to a Cassadine.

Days Of Our Lives Spoilers Friday: Everything Changes In Salem Forever