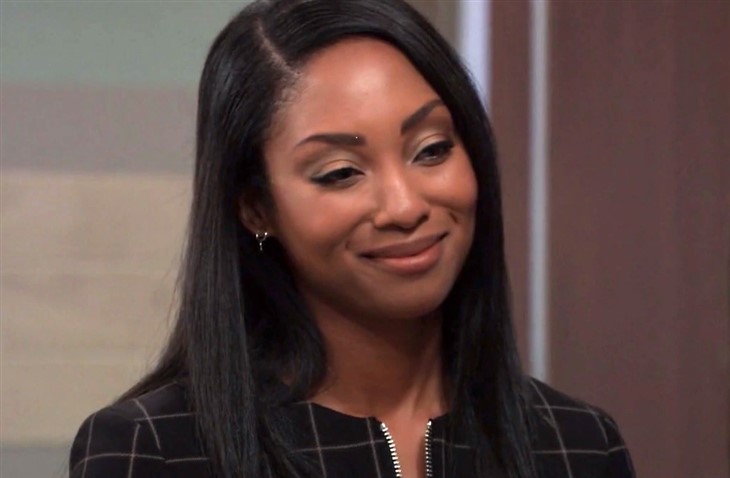 One would think that since Mayor Laura Collins (Genie Francis) has returned, Deputy Mayor Eileen Ashby (Heather Mazur) would dial it down, but it could be her or the ADA.

With Eileen being Victor Cassadine’s (Charles Shaughnessy) plant and Assistant District Attorney Jennifer Arden (Jennifer Field) both having a lot of nerve, it could be either of them.

Whoever it is, it’s someone who has no respect for Jordan and the feeling is mutual-someone’s in dire need of an attitude adjustment!

At the hospital, Britt confides her dire diagnosis in good friend Dr. Austin Gatlin-Holt (Roger Howarth). Britt’s started getting symptoms that indicate her Huntington’s Disease is advancing, and she is a little freaked out as she exclaims she’s got a bomb in her brain.

She’s begun having problems swallowing which could really cause problems and some other issues as well; as a doctor she knows what can happen in detail. No one can blame Britt for being afraid of what comes next and further down the road.

Trina Robinson (Tabyana Ali) will get getting some eye-opening information and she’s at Kelly’s talking to Cameron Webber (William Lipton). Cameron asks Trina what’s holding her back, so it sounds like there is a decision she needs to make.

With everything going on in Trina’s world, it’s understandable that she would take small steps and really think about things.

She should get some additional eye-opening information that will give her pause as well – Esmé Prince (Avery Kristen Pohl) has been spotted in Port Charles.

Cameron may not even know about that yet since his mother may still be in the hospital after her encounter.

Laura appears to be possibly visiting Elizabeth at GH, asking her who’s doing the looking after? Of course Laura will be concerned about Cam and his brothers, with Hamilton Finn (Michael Easton) having walked away and back in his self-pity party.

If Cam’s at work then Jake Webber and Aiden Spencer (Hudson West, Enzo DeAngelis) are by themselves, and with Esmé on the loose that’s not good.

And they don’t even know about Heather Webber (Alley Mills) yet, even though Dante Falconeri (Dominic Zamprogna) appeared to have that situation under control.

Josslyn Jacks (Eden McCoy) checks in with someone, hoping that all of this is worth it. She may be talking to the missing Dex, who she patched up after his gun injury.

He was bleeding pretty badly for having only been “creased” as he put it before she stitched him up at the Quartermaine gatehouse. She found bloody leaves after she left the house and he’d left before Michael Corinthos (Chad Duell) and Willow Tait (Katelyn MacMullen) came home.

She may be hiding him in her room at her mother’s house since the kids moved back home when the Hook attacks were connected to Trina’s trial. Dex wouldn’t let Joss take him to GH even though she tried to convince him.

In addition to desperate ongoing searches for Esmé, Lucy Coe (Lynn Herring) and Anna Devane, (Finola Hughes) there is also a search for Dex. Sonny Corinthos (Maurice Benard) tells someone Dex could be anywhere, and he’ll be summoned to the Port Charles Police Department later.

That’s probably in connection to Anna’s escape since Jordan asked Dante if Sonny could be involved and she would question him. Jordan and Dante came to the conclusion that the driver of the prison transport was a plant, and Sonny and Anna are old friends, so he’s a person of interest.

At Pentonville Prison, Cyrus Renault (Jeff Kober) opines to someone about Anna, saying if she’s on the run it’s best she stays that way. It’s possible his brother Martin Grey (Michael E. Knight) could be checking in, complaining that Anna shot Lucy–as far as he knows.

It might take some persuading from sister Laura to convince him that wasn’t Anna, and it sounds like Cyrus is taking Anna’s side.

Spencer Cassadine (Nicholas Chavez) is also still in Pentonville, and he’ll get a visitor as well. This will be a new visitor, so maybe it’s Trina, after talking to Cam?

At a safe house, Anna is in Valentin Cassadine’s (James Patrick Stuart) arms as they appear to be sleeping on a couch. They are both startled by loud knocking as someone apparently knows right where they are!

That could be very scary, but maybe it’s someone they know who’s on their side, as Anna expresses her gratitude to someone. The house strangely looks like the old Spencer house where Luke Spencer (Anthony Geary) grew up, although it should no longer be standing.

Maybe it’s one in the same neighborhood nearby?

Days Of Our Lives Spoilers: Nicole And Eric Confess All