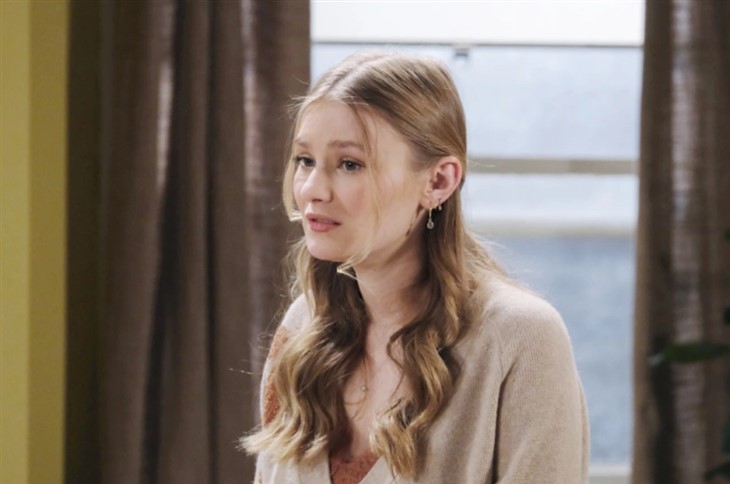 Days of Our Lives spoilers for the week of April 4 reveal that Allie Horton (Lindsay Arnold) goes missing. It’s right after Allie urges Johnny DiMera (Carson Boatman) to fight the devil. When Allie disappears without a trace, Chanel Dupree (Raven Bowens) and Nicole Walker (Arianne Zucker) join forces. Can they find Allie before it’s too late?

DOOL spoilers reveal that Allie has a major showdown with Johnny. It comes after Johnny intercepts Ben Weston (Robert Scott Wilson) and Ciara Brady Weston’s (Victoria Konefal) gender reveal announcement. “CIN” got Allie and Chanel involved in the gender reveal. The bakers are supposed to bake a cake and use a specific color of icing depending on whether the baby is a boy or a girl.

However, it is hinted that “JoDevil” will ruin the entire thing. This sets Allie off on a mission to give Johnny a piece of her mind.

Satan was able to get everyone to believe that Johnny wasn’t the one possessed all this time. Instead, the people of Salem are convinced it was Belle Brady (Martha Madison). When Allie confronts Johnny, she will make a horrifying realization. Just as Belle faced the devil himself, the same thing will happen with Allie.

During the week of April 4, Allie will be horrified by Johnny’s glowing yellow eyes. Allie doesn’t run away, though. Allie desperately tries to get Johnny to fight the devil that’s taken over his body.

Days Of Our Lives Spoilers – Frantic Search for Missing Salemite

Days of Our Lives spoilers reveal that during the week of April 4, Allie will disappear. Chanel will begin worrying about her love interest, best friend, and business partner. Chanel isn’t the only one concerned, though.

When Allie isn’t taking care of Henry Horton (Nash and Clyde Gunderson), Nicole steps in. Plus, Allie still lives with Nicole right now. So, when Allie disappears and never comes home to her son, Nicole knows something is wrong.

It is teased that Johnny is horrified by what he’s done. So, Johnny must get an exorcism or is told about the devil’s actions when the evil entity jumps bodies. A teaser clip released during the hiatus showed Allie helping Ciara deliver her baby.

However, the devil has been waiting all these months for that child. So, it’s likely that Ciara “finds” Allie in the isolated cabin in the woods. However, it might not be Allie that’s delivering Ciara’s baby but the devil himself. Will Ciara and Allie be found before the devil takes baby “CIN?”