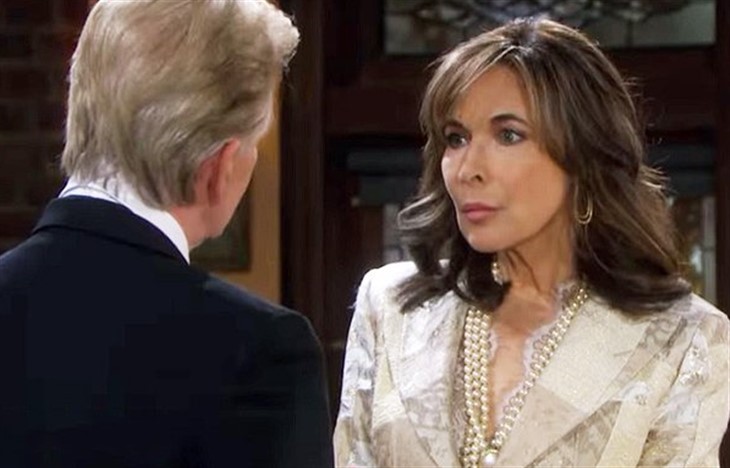 Days of Our Lives spoilers tease that Roman Brady (Josh Taylor) has called it quits with Kate Robert (Lauren Koslow). When Roman found out that Lucas Horton (Bryan Datillo) was the one who kidnapped Sami Brady (Allison Sweeney) last year, and that Kate has knows about it for months, he finally had it. As far as Roman knew, Sami could have been in grave danger the whole time.

Roman was so angry with Kate they he ordered her to not only leave, but to move out of the Pub as well. Kate will completely understand Roman’s anger and won’t blame him a bit for her secrecy. Both Abe Carver (James Reynolds) and Paulina Price (Jackee Harry) believe that Roman will eventually come around, but will he? As far as Roman is concerned, Sami is his baby girl and Kate let Sami go on an extensive trip with the man who held her captive.

Lucas has taken responsibility for his own actioned and has pleaded guilty. He will most likely face serious jail time. Kate was against Lucas doing so, because she didn’t want Lucas to go to prison. But Lucas was adamant about taking responsibility for the things he has done. He won’t enjoy prison certainly, but Lucas knows he committed a crime and needs to face the punishment. Perhaps if Kate would do the same thing, she might have a better shot at reconciling with Roman.

Days Of Our Lives Spoilers – Kate Roberts Has Apologized To Roman Brady!

Kate has apologized for keeping Lucas’ actions a secret. But Lucas has never had to face any responsibility for the things he has done, mostly because Kate has coddled him his entire life. Perhaps if Kate really and truly owns up to the fact that it’s partially her fault that Lucas is the way that he is, then Roman might be willing to give her a second chance. But Kate once shot Vivian Alamaine (last played by Linda Dano) in cold blood and made it look like self-defense so that exactly where Lucas gets it from. Kate needs to do some serious soul searching herself on her own behavior because that’s exactly where Lucas learned it from.

DOOL Soilers – What Do You Think?

Are Roman and Kate over for good? Should Kate accept that Lucas is going to prison? Will she ever own up to her own faults? Anything can happen in Salem so stay tuned to Days of Our Lives airing weekdays on NBC. And don’t forget to check back right here regularly for all your Days of Our Lives news, information and spoilers!