Days Of Our Lives Spoilers: Jack And Jennifer Rage Over No Arrest, Take Drastic Action 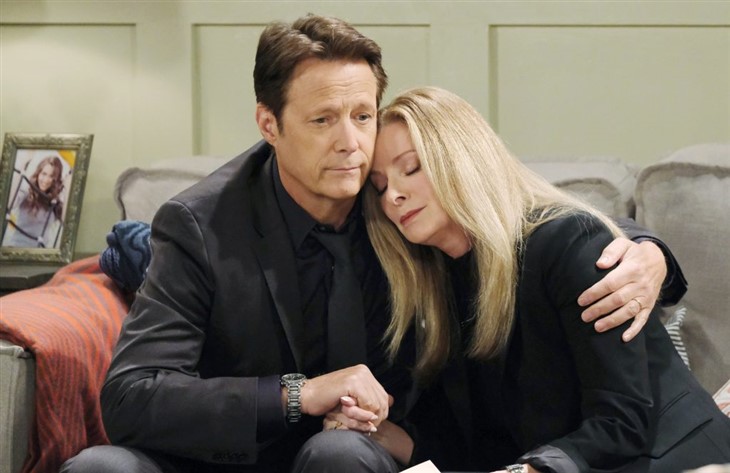 Days of Our Lives spoilers reveal that Jack Deveraux (Matthew Ashford) and Jennifer Horton (Cady McClain) return to Salem. Unfortunately, it’s not a happy homecoming as they come back when Abigail DiMera (Marci Miller) is murdered. Since it will be a murder mystery, there might not be an arrest right away. Jack and Jennifer could take matters into their own hands.

Chad will once again feel like he needs to confess. However, Kate Roberts (Lauren Koslow) will likely prevent Chad from saying anything. Then, Chad finds Abigail’s dead body. Considering Abigail was investigating Sami’s kidnapping and getting close to the truth. So, Chad might assume that Lucas is responsible for Abigail’s death.

However, the murder investigation won’t be solved that quickly. Head writer Ron Carlivati talked to Soap Opera Digest about the murder mystery. The scribe hinted that there would be multiple suspects and motives.

“If all that was not enough [the summer preview], there’s going to be a shocking murder that will rock all of Salem. And the suspect list is a mile long.”

Days of Our Lives spoilers for the week of June 13 reveal that Jack and Jennifer come back to town after Abigail’s murder. As parents, they are going to demand answers and an arrest. However, the case will have a lot of twists and turns, as well as a few red herrings.

Lucas might be the prime suspect once the police learn of Sami’s real kidnapper. Even Lucas himself becomes convinced that he’s guilty due to blacking out the same night as Abigail’s death.

However, there are also Leo Stark (Greg Rikaart) and Gwen Rizczech (Emily O’Brien). Leo wanted revenge on Abigail and got caught hiding out in the DiMera mansion. As for Gwen, she has always hated her sister. Plus, Gwen and Abigail have a heated exchange before the murder.

Days Of Our Lives Spoilers -Getting Answers

When the police don’t make an arrest quickly enough, Jack and Jennifer could take matters into their own hands. They might start where Abigail left off… by looking at the investigation into Sami’s kidnapping.

However, will Chad tell them what he knows, or is the kidnapping even the right motive in Abigail’s murder? It’s possible that the killer is someone not even on screen right now. It’s also possible that Abigail’s death wasn’t due to the investigation, but a case of mistaken identity or she was just in the wrong place at the wrong time.

Counting On: Will Jim Bob Duggar Sue Katie From Without A Crystal Ball?