Days Of Our Lives Spoilers: EJ And Johnny’s Hot Battle Over Ava, She Rejects Both 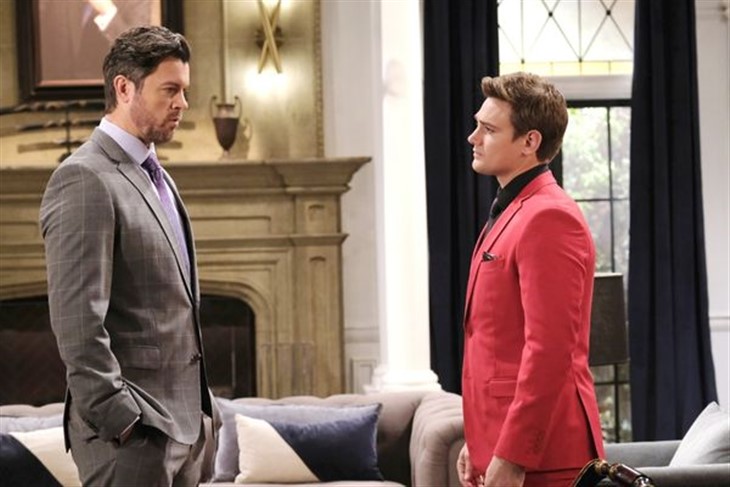 Days of Our Lives spoilers and rumors tease that a lusty EJ DiMera (Dan Feurreriegel) and his son Johnny DiMera (Carson Boatman) will get into a hot battle! They might fight over a sexy Ava Vitali (Tamara Braun) but her heart belongs to the late Jake DiMera (Brandon Barash) and she’ll reject both of them.

Johnny went into his uncle Chad DiMera’s (Billy Flynn) former room at the DiMera mansion recently not realizing he and his children had moved out. Johnny was clad only in a towel as he went in to borrow some shampoo and spotted Ava slipping out of her robe, also naked underneath. Ava was as startled as Johnny, and a humorous although confusing conversation ensued between them.

As Ava tried to explain Chad moved out and tell him she’d married his uncle, but not which uncle, Johnny misunderstood she’d married Chad. Ava explained and then Johnny turned around to pick up something on the floor when his towel fell off, and she was definitely impressed!

In the meanwhile, EJ had invited Ava to move in but he had ulterior motives of trying to wrest the late Jake’s DiMera stocks from the sexy “widow”. But he didn’t know that Gabi Hernandez DiMera (Camila Banus) who is the “widow” of Jake’s twin Stefan O. DiMera (Brandon Barash) convinced Ava to join her in a scheme. Ava and Jake had only been engaged for about a minute when a mugger shot him and killed him right in front of her. Gabi convinced her to agree to a fake marriage license so she would inherit Jake’s stocks but that way Gabi stayed put at DiMera Enterprises as well. Gabi certainly changed her tune since Ava had been involved with her brother Rafe Hernandez (Galen Gering).

Days Of Our Lives Spoilers: Father And Son, A Shared Attraction

Even though Ava appreciates a good looking naked male body, she’s not the least bit interested in moving on from Jake this soon. She found the whole “naked truth” amusing, so to speak, when she and Johnny got unexpected sneak peeks of each other. She’ll be even more amused when she realizes both EJ and Johnny, a father and son, are attracted to her.

Ava may still be grieving Jake, but she’ll likely have herself a good time flirting with father and son, inciting jealousy between them over herself. She’ll find it even more amusing when they battle over her, and she’ll end the battle by rejecting both of them when they’re all together.