Days Of Our Lives Spoilers: Chad And Will Are Ready To Solve A Murder 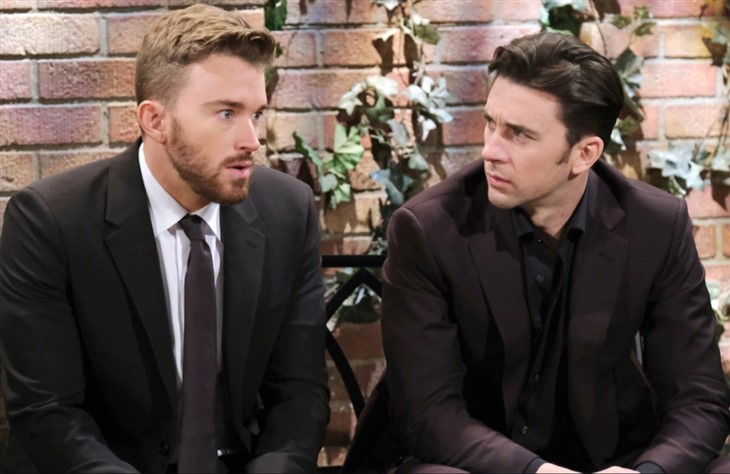 Days of Our Lives (DOOL) spoilers for Monday, September 19, 2022, reveal Chad and Will determined to get to the bottom of things.

It’s time to delve back into ‘Who Killed Abigail’ again by trying to figure out who stabbed Sonny Kiriakis (Zach Tinker). Chad DiMera (Billy Flynn) and Will Horton (Chandler Massey) team up to go over the events of that night to see if they can figure out what really happened the night Sonny was stabbed. Leo Stark (Greg Rikaart) keeps insisting that he is innocent and is being set up, but is that actually true?

One key to finding that out is Sonny himself, so his husband and his best friend do their best to walk sonny through everything that happened the night he was stabbed to see what he can remember. Will this mystery finally, finally be solved.

As for Leo, he gets more desperate than ever and turns to Gwen Rizczech (Emily O’Brien) to try to solve things. Since these two tried to throw the other under the bus, Gwen doesn’t seem like a very good ally at the moment at all.

It’s been a pretty traumatizing year for Nancy Wesley (Patrika Darbo). Not only did she learn her longtime husband Craig Wesley (Kevin Spirtas) was cheating on her, but he also admitted he was gay and in love with a man.

Nancy finally decided to move on with her life and date ex-con Clyde Weston (James Read), but when she overhears something she shouldn’t, Nancy deduces that Clyde must be cheating on her now, too. However, something tells us whatever is going on is worse than cheating.

Days of Our Lives Spoilers – Xander Kiriakis Has A Million Problems

Poor Xander Cook (Paul Telfer) can’t believe he finally married Sarah Horton (Linsey Godfrey) and she already left him just because of a one-night stand with Nicole Walker (Arianne Zucker) when he thought that she had left him. He has done so much worse than that, but this is the bridge too far for Sarah.

To that end, Xander turns to Jack Deveraux (Matthew Ashford) for some advice on how to win Sarah back, but is Jack the best choice right now as he is still mourning his murdered daughter? Stream Days of Our Lives weekdays on Peacock by 6 am EST each morning.

Y&R Spoilers: Kyle Has A HUGE Proposal For Summer