B&B Spoilers: Sinn Reunited, But Is Steffy OK Or Did Sheila Do Major Damage To Her Psyche? 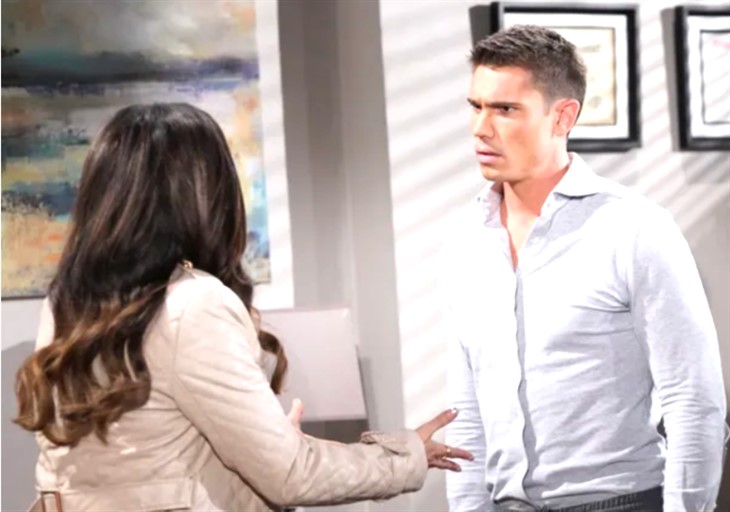 The Bold and the Beautiful (B&B) spoilers tease that Sinn is soon to be reunited and for that fans are overjoyed. But will their bubble burst prematurely? Is there going to be a calamitous wrench thrown into this happy reunion? Let’s unpack the strange twist that could be coming for John Finnegan (Tanner Novlan) and Steffy Forrester (Jacqueline MacInnes Wood).

The Bold And The Beautiful Spoilers – Is Steffy Forrester Off?

Explosive show spoilers tease that Steffy may act a little odd after she discovers that Finn is alive. No doubt she will be overjoyed but let’s not forget that at the moment she is in a treatment facility due to her being unable to cope with her grief.

Finn’s presence will be a miracle for Steffy, but that doesn’t mean her psyche will heal overnight. There was a lot of trauma drama that went on between her, Finn and Sheila Carter (Kimberlin Brown). A Sinn reunion in Monaco is on tap and at first everything looks like champagne and roses.

Any awkwardness for Sinn will be chalked up to the past. But the past may not stay in the past, it may contaminate the future.

Steffy was trying to be strong when she left LA to recuperate, but her fragility is obvious, given that she checked herself in for treatment. Just how unstable is she? Finn is a doctor and he may become immediately scared for her, which her relatives could pass off as excessive fear or caution on his part. They will not want to be believe that Steffy is in any danger now that Sheila is contained.

Her parents Taylor Hayes (Krista Allen) and Ridge Forrester (Thorsten Kaye) are on their way to see Steffy, but they were surprised when a doctor called to tell them about Steffy.

The Bold And The Beautiful Spoilers – What Happens Next On The LA Based Sudser?

Soon, all of Steffy’s loved ones will be in Monte Carlo with her. But this will be another overwhelming shock for her even though it is a positive happenstance.

Will Finn see red flags regarding his wife’s behavior? On top of that, Li Finnegan (Naomi Matsuda) saved Finn’s life, but she also kept Steffy in the dark about his fate. Will Steffy have bad blood against Li just as Finn is ready to devote himself to her care after Sheila nearly killed her, too? A lot is coming up in the next few days B&B fans, and you do not want to miss a single minute of the dramatic conflict!