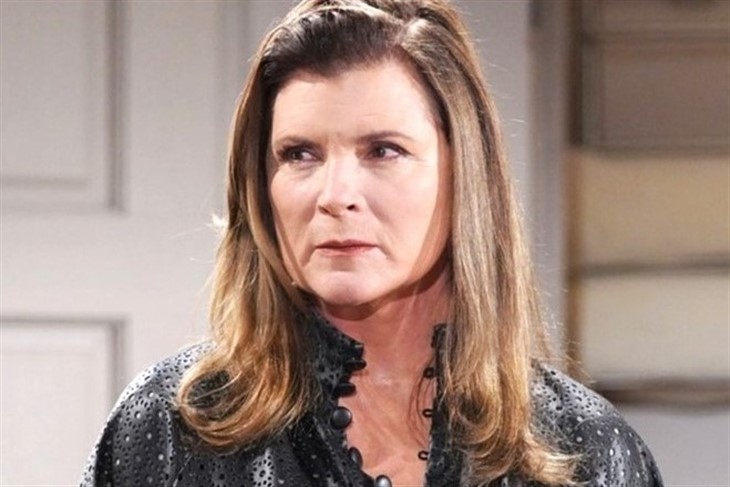 The Bold and the Beautiful (B&B) spoilers for Friday, April 1, 2022, reveal Sheila is ready to go off the deep end once again as she has been doing for more than three decades.

The Bold And The Beautiful Spoilers – Steffy Forrester Better Watch Out

Steffy Forrester Finn (Jacqueline MacInnes Wood) didn’t really care how crazy Sheila Carter (Kimberlin Brown) is when she decided to confront her about what she did to Brooke Logan Forrester on New Year’s Eve. She had something to say and was ready to kick her out of their lives once again. Then, she does the dangerous thing and tells Sheila that Finn (Tanner Novlan) already knows what she did.

That completely freaks Sheila out because Finn had just told her he wants to forget about the past and make amends with his mother. Sheila was thrilled but now she is furious. That rotten Steffy ruined everything for her and now Steffy is going to have to pay. You don’t play with Sheila Carter’s life or you’re going to find out what she will really do to you and Steffy is about to find out.

B&B Spoilers – Ridge Forrester Has A Warning For Taylor Hayes

Taylor Hayes (Krista Allen) was responsible for Steffy welcoming Sheila into her life because Taylor was determined to see the good in everyone. That made Sheila so grateful she anointed Taylor her BFF and put her plan into action to get Brooke out of Ridge Forrester’s (Thorsten Kaye) life.

Ridge can now see Sheila is more off than ever of late and warns Taylor to stay away from the woman for her own good. Little does he even know what Sheila did to blow up his life and his marriage — and that she is about to threaten and maybe even hurt both of his children.

Taylor finds it hard to believe things can be that bad, but she does remember a few odd and off moments with Sheila. The woman shot her and left her for dead years ago, so hopefully, she takes Ridge’s advice and kicks that nutty woman out of her life for good. Or, is it too late? Stay tuned to The Bold and the Beautiful weekdays to see how these stories play out.

Days Of Our Lives Spoilers: An Allie And JoDevil Showdown You Won’t Forget