B&B Spoilers: Li And Sheila Tear Into Each Other, Taylor Tries To Make Peace! 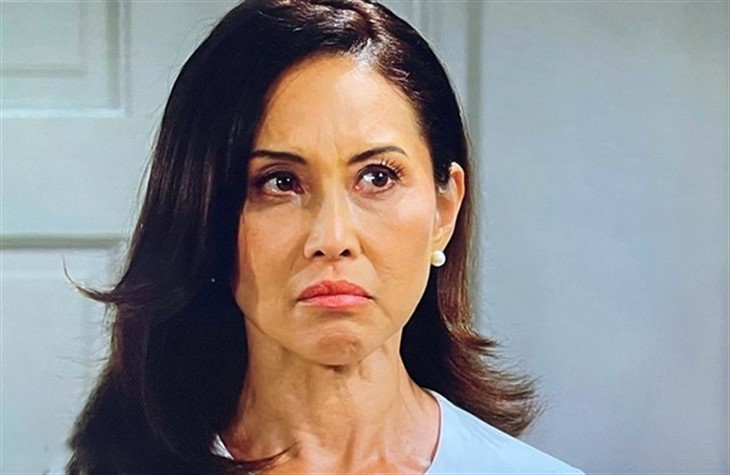 The Bold And The Beautiful Spoilers – Tension, Tension, All-Around As John “Finn” Finnegan Hangs On By A Thread

Viewers of The Bold and The Beautiful will remember that Deacon Sharpe (Sean Kanan) tried to comfort a frantic Sheila in the alley behind Il Giardino as she realized she’d shot her own son by mistake! Dr. John “Finn” Finnegan (Tanner Novlan) came to a meeting that Thomas Forrester (Matthew Atkinson) was supposed to come to, and Sheila took a shot in the dark meant for Thomas and didn’t realize it was Finn! Finn was hanging on by a thread bleeding out on the ground when Deacon called 911 and now his survival is in question as his parents are surrounded by the Forresters including Taylor who does her best to keep everyone calm.

As everyone waits to see what will happen to Finn in the very hospital that he and Taylor are working in, viewers of The Bold and The Beautiful will see Li Finnegan and Sheila, who is also in the waiting room of the intensive care unit begin arguing!

Viewers of The Bold and The Beautiful will see Li and Sheila get into a fierce argument in the waiting room, with Li rebuffing Sheila for even being allowed there! Viewers of The Bold and The Beautiful can expect that there will be plenty of Li telling Sheila she is no mother to Finn because Li was his real mother, the mother he grew up with and who raised him!

Sheila will become enraged at Li, and of course will claim herself as his birth mother trumps Li as his adoptive mother and their conflict will become extremely intense and attract the attention of hospital security! The two women will continue to argue with each other on who’s the mama until Taylor decides she has to intervene as a peacemaker because this is not helping anyone, let alone giving any good karma to Finn as he barely clings to life! Taylor understands there is a lot of fear and tension for everyone as no one knows what the outcome will be.

Taylor tries her best to keep everyone thinking positive thoughts, encouraging those who believe in prayer to pray, and plead as a mother to a pair of mothers to not bring rivalry and ugliness into the terrible situation that they all are facing! Taylor is firm, however; if the two of them continue to argue and to make a scene, she will call security and have both of them removed as a last resort!

90 Day Fiance Spoilers: Yara Zaya Tries To Get To Ukraine