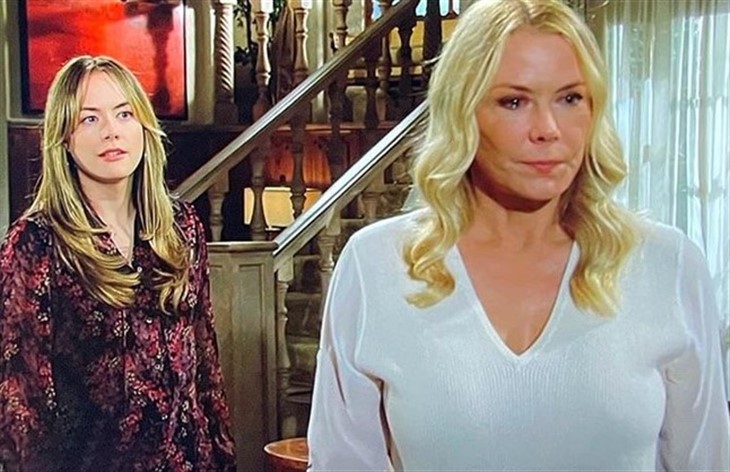 The Bold and the Beautiful (B&B) spoilers document that Brooke Logan Forrester (Katherine Kelly Lang) had a point. But she has no filter, as longtime fans, including Brooke fans, know.

Volunteering her opinion about Steffy Forrester Finnegan’s (Jacqueline MacInnes Wood) state of confusion to Taylor Hayes (Krista Allen) was wrong. Steffy just woke up, with her mind being damaged and clouded by the heinous actions of a killer and shooter who is unknown to all except the audience.

Hope Spencer (Annika Noelle) followed her mother’s lead when making the situation about the Logan’s. But Taylor set them straight and then was backed by Brooke’s daughter.

The subject header is subjective. It is also arguably accurate.

As Taylor said, John Finn Finnegan (Tanner Novlan) was shot dead, and Steffy was hospitalized after being shot. Steffy’s mind defaulted into self-protect mode by returning to a secure time in her life. That is why she believes Liam Spencer (Scott Clifton) is still her husband.

Meanwhile, Brooke is dealing with the now as though it could be forever. Hope parroted her mother’s me-first outlook when sarcastically asking if she will be forced to play along with Steffy believing Liam is still her husband for years to come.

As longtime fans recall, Brooke became involved with Deacon Sharpe (Sean Kanan) while Bridget was married to him. Hope’s birth happened because of that connection. Jones’ character was wrecked in daytime days gone by. Fans assume Bridget will be brought up to date about Brooke and Deacon’s New Year’s Eve adventures.

Now, Brooke impulses into telling Taylor that she should serve as the bridge (pun intended) to help Steffy recover her memory. As has long been true, Brooke does what she wants to do, with other people’s feelings being a secondary consideration, if that.

Fans who know Steffy must believe that she will have her say when fully recovered. Taylor is sure to tell her daughter that Brooke and, to a degree, Hope tried to coerce Steffy’s memory into being jogged well before it would have been medically advisable to do so.

Steffy will confirm what she has believed for years. Hope is not secure in her marriage to Liam Spencer (Scott Clifton). That realization does not mean Hope and Liam’s marriage is weak or will collapse.

Some day in the relatively near future, Steffy will be operating on all cylinders. Sheila Carter (Kimberlin Brown) is the first person Steffy must deal with, but Brooke and Hope will also hear from Wood’s character.

Did The Duggars Send Josh Away MULTIPLE Times As A Child?