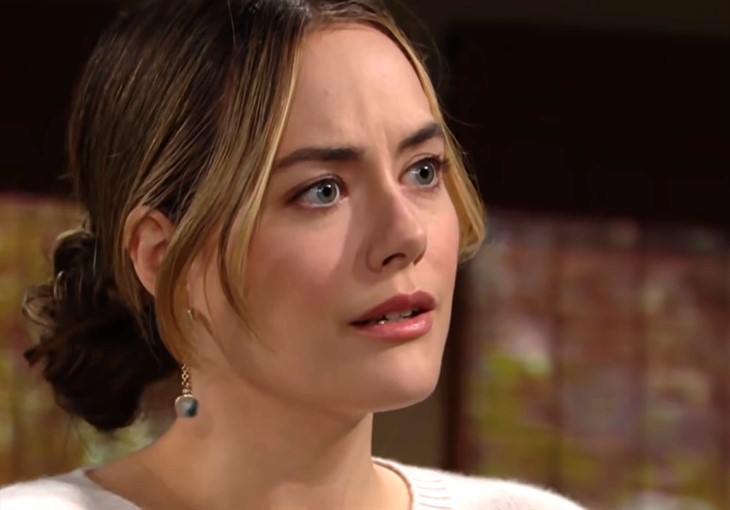 The Bold and the Beautiful (B&B) spoilers reveal that in Los Angeles Hope Logan (Annika Noelle) has been painted as the Saint of Soaps. She can seem to do no wrong, especially in Brooke Logan Forrester’s (Katherine Kelly Lang) eyes. It is confirmed “Lope” separate but could the pain cause a major personality change? Is it possible that Hope’s agony could have her seeking revenge?

B&B spoilers reveal that there are good girls in soaps and then there are the naughty villains. It’s common for characters to play one end of the spectrum for a while before writers send them the other way. No matter what Hope has done, she is always painted as the Saint of Soaps. She has been written like this for quite some time now, so a role reversal might be coming up.

One sign that Hope might switch gears is the constant and overused “capacity for forgiveness” statements. It seems like everyone keeps talking about how amazing her forgiveness is for others. She was put on a pedestal by being there for Thomas Forrester (Matthew Atkinson) during his brain surgery and mannequin storyline. The more characters keep gushing about how forgiving she is, the more we’re starting to suspect a big change is coming up.

The Bold And The Beautiful Spoilers – Hope Logan’s Pain Too Much?

The Bold and the Beautiful spoilers reveal that Liam Spencer’s (Scott Clifton) betrayal is devastating to Hope. She is in a lot of pain and isn’t in any mood to keep forgiving Liam. She will ask for separation and it’s clear there is a lot of anger. When characters go through a transformation, it’s usually something quite painful that triggers it. Could Liam’s heartbreaking betrayal change the way we see Hope on-screen?

There is also the fact that Thomas was a villain for so long. He was fixated on Hope and did everything in his power to make her his own. Now he has suddenly been redeemed and is a good guy. So, wouldn’t it be interesting if the tables were turned and Hope ended up becoming the villain? In fact, we could see Thomas and Hope getting closer, but would his feelings change if the good girl suddenly turned bad?

The Bold And The Beautiful Spoilers: Hope’s Had Enough – Paternity Reveal Won’t Save Lope Marriagehttps://t.co/LF19gK9R0u

She might not just want revenge on Liam and Steffy Forrester (Jacqueline MacInnes Wood). She could target Flo Fulton (Katrina Bowden), especially since she’s been forgiven by everyone else. Nobody asked Hope how she felt about the situation. Plus, she is now working at Forrester Creations. All of this combined with Liam’s betrayal could send Hope over the edge. We will have to keep watching the CBS soap to see what the writers have planned.