The Bold And The Beautiful (B&B) Spoilers Next Two Weeks: Drama, Mess, Stress and A Sticky Situation 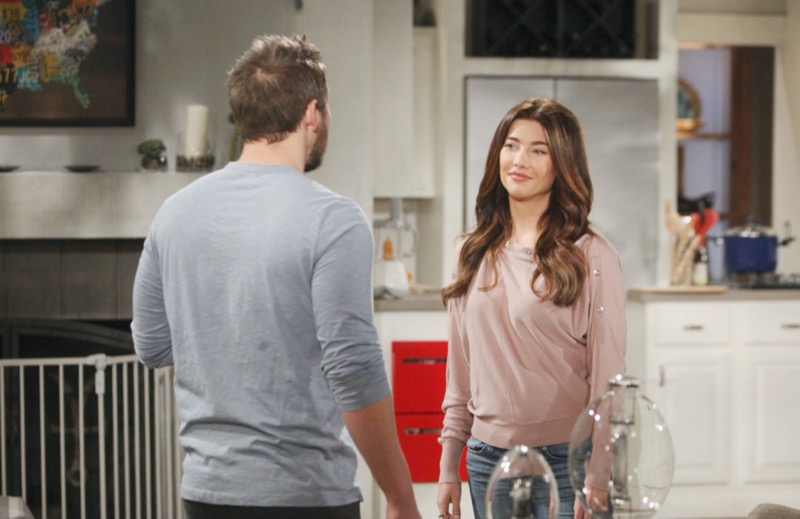 The Steffy Forrester (Jacqueline Macinnes Wood) baby storyline continues this week, as daggers come flying from all sides to mess and stress! Viewers will recall that Hope Logan Spencer (Annika Noelle) already reamed Steffy out about her adultery with Hope’s husband, Liam Spencer (Scott Clifton). Hope knows it took two to tangle and two to consent. The news of Steffy’s pregnancy and that she didn’t know if the baby was Liam’s or not didn’t help matters any.

However, her serious boyfriend, handsome Dr. John “Finn” Finnegan (Tanner Novlan) loves Steffy and decided to stay by her side as she takes a paternity test to find out for sure if the baby she is carrying is Liam’s, or Finn’s. As for Hope, she still has some family members to bring into the loop about her sad state of affairs – actually, Liam and Steffy’s affair. It was only a one night stand but it resulted in a pregnancy and Hope has not been able to forgive the betrayals of either Liam or Steffy. Hope leans on her mother, Brooke Logan Forrester (Katherine Kelly Lang) and tells her everything.

Ballistic Brooke immediately seeks Steffy to give her a piece of her mind for hurting her daughter yet AGAIN by sleeping with her husband! Steffy is not one to cower and whimper, however, and throws proven accusations against the slut from the valley! Steffy than rushes to tell her father, Ridge Forrester (Thorsten Kaye) what happened before Brooke tells him her version first. Daddy Ridge is nothing if not supportive! She explains what happened and that she doesn’t know yet if the baby resulting from her drunken one night stand with Liam is his or Finn’s but she is waiting on the results of the paternity test to come back.

The Bold And The Beautiful (B&B) Spoilers: Steffy Wants To Believe That Finn Fathered Her Baby, Tired Of Finn Drama

Viewers will also recall that Steffy’s ob-gyn, Dr. Campbell (Tina Huang) had warned Steffy that stress may not be good for the baby – or Steffy! The outburst from Brooke may be so stressful that Steffy, and maybe Finn with her, may take a well-deserved vacation in Paris, France to alleviate the stress and the danger from the stressful situations.

It may well be revealed that Finn can have a pretty nasty temper himself, and need to separate himself from Steffy’s extended family of Brooke, Hope, and Liam before he does something he might regret! He wouldn’t hurt Hope but Brooke and Liam might be fair game! Meanwhile, Steffy’s brother, Thomas Forrester (Matthew Atkinson) will continue to offer support and friendship to Hope that may turn into more. In the meantime, both Hope and Finn pray that Liam’s necessary relationship with Steffy will turn into a more appropriate one, of two divorced parents co-parenting their child, not of one being emotionally dependent on each other!

In the midst of all the chaos in his own family, Ridge intervenes in a sticky situation among his close friends and family at Forrester Creations! Viewers will recall that Carter Walton (Lawrence Saint-Jacobs) asked Ridge to be his best man at his impending wedding to Zoe Buckingham (Kiara Barnes). But Zoe has eyes for Zende Dominguez (Delon deMetz) and Ridge walked in on her attempted seduction of Zende at the Forrester mansion! Ridge may have had plenty of tea and sympathy as well as protectiveness towards his daughter Steffy, but he has nothing but contempt towards Zoe!

Zoe plays Carter by telling him she wants to get married right away, but Carter doesn’t know he’s her second choice! Ridge won’t let this catastrophe waiting to happen hurt his best friend, and he will tell Carter in a caring, supportive manner that perhaps the woman of his dreams is really a nightmare in disguise! Ridge won’t hold back as he warns Carter what he’s in for if he goes through with the marriage, and won’t leave out any details of what he heard and saw! Now Ridge will employ his comforting skills on Carter!

The Young And The Restless Comings and Goings: Don Diamont Returns To GC – Reconnects With Peter Bergman