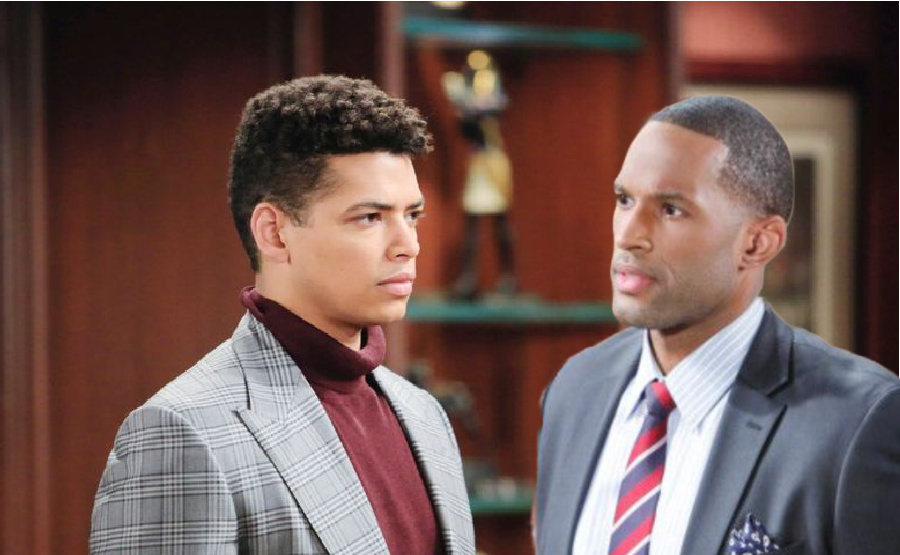 The Bold and the Beautiful spoilers reveal that Carter Walton (Lawrence Saint-Victor) wants nothing to do with his former fiancee. What’s more, is that he has something to say to Zende Forrester (Delon de Metz). He discovers the text message that Zende sent to Zoe Buckingham (Kiara Barnes) and blasts his friend. There is nothing that Zende can say that Carter wants to hear. He is done with both of them and doesn’t believe anything either of them say.

B&B spoilers reveal that Zoe tries to explain her actions to Carter, but really can’t. As far as if her apologies are genuine or what her true motivations are, Saint-Victor says that it’s really not clear. She regrets something, but whether it’s actually losing Carter or just getting caught in her cruel game is unclear. Carter decides that he is done with Zoe and wants nothing to do with her ever again.

At some point, Carter finds the text message that Zende sent to Zoe all those months ago. The one where he told Zoe not to move forward with Carter until they had a chance to talk. Of course, Zoe didn’t get this text message until recently. Well, when Carter discovers it, he is furious. It’s just proof that what Ridge Forrester (Thorsten Kaye) said was the truth. That Zoe and Zende had an interest the entire time. It shows Carter that even though he was in a relationship, Zende felt it was still acceptable to chase after Zoe.

The Bold And The Beautiful (B&B) Spoilers: Bill Turns To The Logan Family For Their Help

The Bold and the Beautiful spoilers reveal that Carter goes to confront Zende. He is livid that someone he considered a friend would sneak behind his back and pursue the woman he was dating. He doesn’t consider that the actions of a true friend. It’s extremely hurtful to Carter and he realizes that he’s not just been betrayed by Zoe, but by Zende as well.

The Bold And The Beautiful Spoilers: Carter Walton Done

In the new issue of Soap Opera Digest, Saint-Victor explains that Zoe and Zende are both full of apologies and excuses. However, Carter isn’t interested in what they have to say. He doesn’t even believe them anymore.

“It gets pretty intense [confronting Zende]. As if this thing isn’t devastating enough, the fact that it was Zende is another blow. Carter learns about the text that Zende sent her, and that proves that Zende did go after Zoe. Carter is upset and angry that someone he considered a friend would not only keep this from him but pursue her. Zoe and Zende are both apologetic, but there is absolutely nothing they can say that Carter would believe.”

Days Of Our Lives Comings And Goings: A Newbie Debuts, A Rapper Checks In and A Doctor Departs Salem