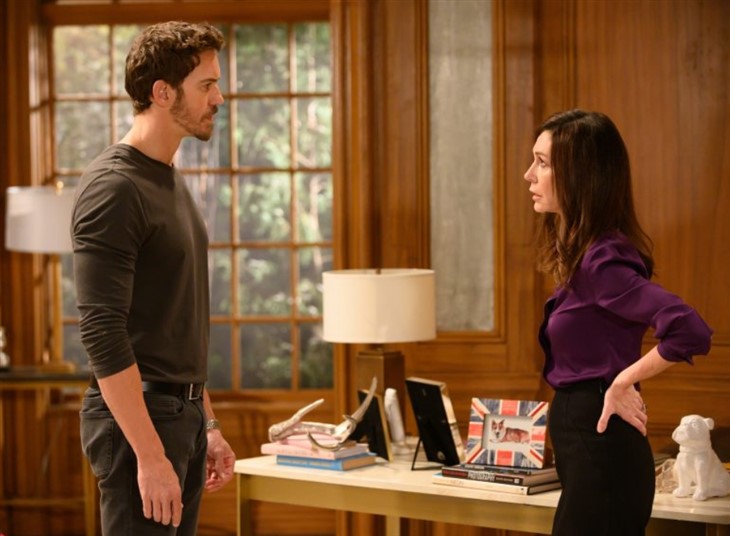 General Hospital (GH) spoilers tease that Anna Devane (Finola Hughes) will apologize to Dr. Hamilton Finn (Michael Easton) in an upcoming episode of General Hospital, and will tell him he was right about Peter August (Wes Ramsey)!

Anna has slowly and painfully realized that the man who she loves as her own son, and has claimed as such, has been lying to her all along as well as everyone else! Finn has tried to get her to see the truth but she couldn’t – or maybe she just didn’t want to. But she was forced to the day that she met with Valentin Cassadine (James Patrick Stuart) and showed him the files she got on the late Dr. Warren Kirk (Jameson Jones) with the help of Dr. Kevin Collins (Jon Lindstrom).

General Hospital Spoilers: Will Molly Lansing-Davis And Tj Ashford Go Through With Their Wedding Plans?

Even though she was trying to find out intel on Dante Falconeri (Dominic Zamprogna) and his treatment, because Valentin had clicked his pen when working out brother-sister time arrangements for Rocco Falconeri (O’Neill Monahan) and Charlotte Cassadine (Scarlett Fernandez) and noticed Dante’s reaction, she found a lot more! It showed Liesl Obrecht (Kathleen Gati) had been his patient and was released from Steinmauer, although everything else was above Anna’s WSB clearance. They also found out Liesl was exonerated, which meant that Peter had been lying to them and had framed Liesl for his own crimes! Finn had caught Anna in a cover up for Peter last summer, when he found a file on Peter she had thrown away – and he had called her on it! Now, after she and Valentin found out Peter had been lying to both of them, and worse, now she has finally admitted to herself that Finn was right all along!

GH – Anna Devane Apologizes To Hamilton Finn About Not Believing Him

Now Anna realizes that Finn was right about Peter all along – and she knows she has to apologize to him. She feels awful knowing now that she was protecting a dangerous man with a kind and loving façade! All of Peter’s lies as well as Peter himself have been exposed, and even she was in danger from a man she thought of as her own son!

According to General Hospital recaps, Anna thought Peter loved Maxie Jones (Kirsten Storms) until she and Valentin exposed Peter and it turned out Peter was only trying to have what his late half-brother Nathan West (Ryan Paevey) did – right down to the same wife and a new baby and Maxie and Nathan’s child James West (Owen and Curtis Rufca)! All of Peter’s undying love and devotion to Maxie had only been jealousy and competition against his late half-brother! Even Britt Westbourne (Kelly Thiebaud) had seen through Peter.

General Hospital spoilers reveal Anna has many to apologize to, considering her refusal to see what Peter really was inside endangered many of her loved ones and friends. She thought her protection of him would keep him from becoming what his father Cesar Faison (Anders Hove) was, when all along it was already in him – as well as the evil parts of her own sister, which really became magnified in the end.

She sits Finn down and not only apologizes but beats herself up for her refusal to listen; she still doesn’t believe in inherent evil being inherited, but she wishes she had known about Peter and been able to influence him when he was young. Finn reminds her Valentin already tried that, and it didn’t work either but he forgives Anna.