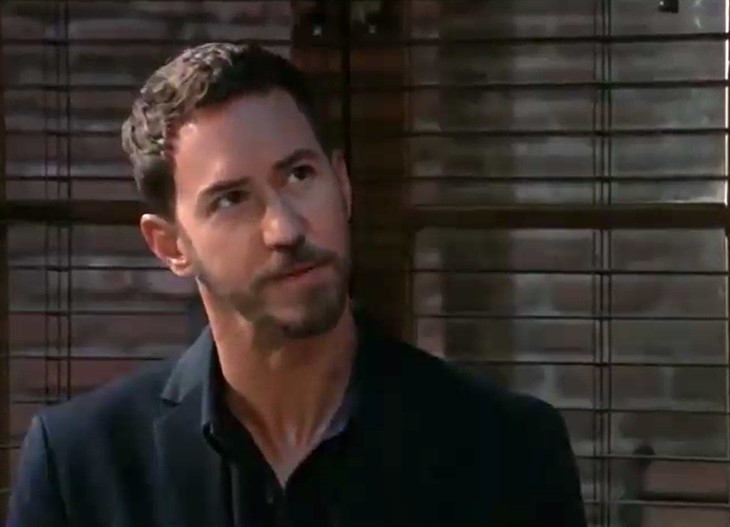 General Hospital (GH) spoilers tease that Peter August (Wes Ramsey) has his hands full trying to stay ahead of all the various people who are trying to prove he’s guilty of some pretty serious crimes. So far, over the past few years, Peter has managed to put out all of fires that could have exposed him. Unfortunately, the crimes that Peter has committed to cover up his wrongdoings are just as bad, if not worse than what he’s trying to cover up.

Peter was responsible for Drew Cain’s (Billy Miller) plane crash, leaving Drew presumed dead. He also ordered a hit on Franco Baldwin (Roger Howarth) and Andre Maddox (Anthony Montgomery) but called it off at the last minute, killing the hitman instead.

Most recently, General Hospital spoilers show Peter framed Leisl O’Brecht (Kathleen Gati) although she has been cleared. But the good Dr. O’Brecht is determined that Peter finally pay for his crimes and she’s not alone. Several Port Charles residents would like nothing better than for Peter to be exposed as the criminal he is.

Recently, a mysterious person sent Peter a copy of Alex Devane’s (Finola Hughes) Last Will and Testament as well as a mysterious flash drive. Although not confirmed, the package was sent by Dimitri Marick (last plaued by Michael Nader on All My Children), who was once married to Alex when she was a Pine Valley resididentl.

While it’s anyone’s guess what is on the flash drive, it might very well be that Alex has left a confession that she, and not Anna Devane (also Finola Hughes) is actually his mother. According to GH spoilers, Peter believes that there is good in him because of Anna, but finding out he is actually Alex’s son may lead Peter to decide that he is truly a bad guy, and will give up any hope of starting a new life.

General Hospital Spoilers – Maxie Jones Has Believed In Peter August And Is Planning To Be His Bride!

Maxie Jones (Kirsten Storms) is one of the few people who have never given up on Peter. At some point, she fell in love with him and is now about to finally marry him and is carrying Peter’s child. But some of Peter’s recent comment regarding Maxie seem to indicate that he sees her as more of a prize to be won. He commented at his brother, Nathan West’s (Ryan Paevey) that soon he would make sure Nathan was forgotten by Maxie and Nathan’s son, James West (Owen & Curtis Rufca).

Will Peter decide to go full-on villain if he finds out Alex is his mother? He seems to enjoy letting his dark side out more and more in recent weeks. Both Damian Spinelli (Bradford Anderson) and Dr. Britt Westbourne (Kelly Thiebaud) have been on the receiving end of Peter’s threatening side in recent weeks. Peter may actually be relieved to actually be himself, although he will likely lose Maxie.

What’s on the flash drive that D. Marick is sending Peter’s way? Will Peter finally hear the truth that he is the son of Alex, and that both of his parents were morally compromised? Without thinking Anna balances out the evil genes from Cesar Faison (Anders Hove), will Peter decide to finally embrace his criminal tendencies?

Good and evil are always in the middle of battle in Port Charles, so stay tuned to General Hospital airing weekdays on ABC. And don’t forget to check back right here regularly for all your General Hospital news, information and spoilers!

The Young And The Restless (Y&R) Spoilers: Faith Newman Faces Off With Furious Sharon