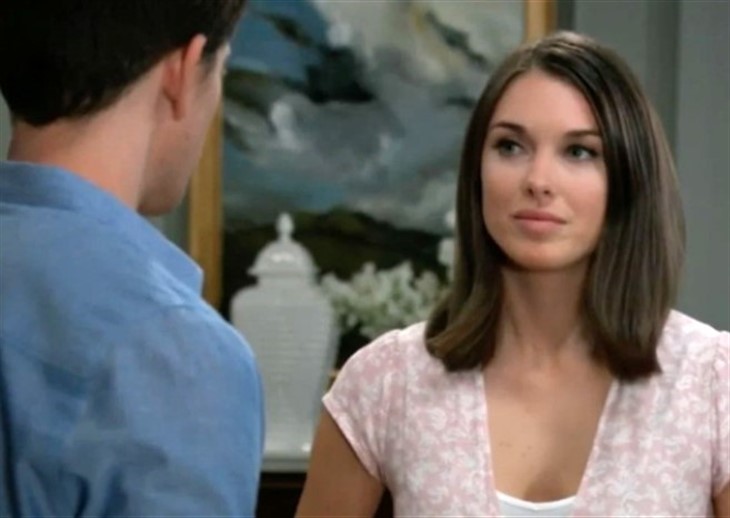 General Hospital (GH) spoilers tease that in Port Charles, NY just when Michael Corinthos (Chad Duell) and Willow Tait (Katelyn MacMullen) reluctantly decided to get an annulment, word comes down that the Corinthos family, including Michael could be in very real danger most likely from Cyrus Renault (Jeff Kober). Michael won’t think it’s a good time for Willow to move out so any plans that they may have to reunite with Sasha Gilmore (Sofia Mattsson) and Harrison Chase (Josh Swickard) may have to wait. And truth be told, the passion may be gone for both of those couples anyway.

General Hospital Spoilers – Michael Corinthos And Willow Tait May No Longer Want Their Exes Back.

Michael’s feelings for Sasha are still present but Sasha has changed since she and Chase faked their affair in order to push Michael and Willow together. She started using drugs and almost died of an overdose. Although she is staying clean, it’s still a struggle. And she may have developed feeling for Brando Corbin (Johnny Wactor) without even realizing it. As far as Chase and Willow are concerned, Chase may soon be facing an identity crisis if he discovers that Hamilton Finn (Michael Easton) is actually his father and not his brother as he has believed his entire life. This will likely send Chase on a downward spiral which would certainly put a damper on his desire to reunite with Willow.

GH Spoilers – Even though Michael Corinthos And Willow Tait Have Annulled Their Marriage, Shocking News May Bring Them Closer Than Ever

It wasn’t all that long ago that Michael and Willow finally made love, making their marriage very real. They certainly enjoyed their passionate encounter and it still seems quite possible that Willow will find out she pregnant. Since she hasn’t yet reunited with Chase, it will definitely be Michael’s child. That might be the very thing that makes the two of them realize they need to stop fighting it. They belong together. Willow will be thrilled to once again have a baby growing inside her. Michael would also be thrilled.

Will Willow decide to move out of the Quartermaine’s property despite Michael’s warning? Could Willow or Michael actually be in danger. Will Willow soon discover that she is carrying Michael’s baby? Friendship turns into love all the time in Port Charles, so stay tuned to General Hospital airing weekdays on ABC. And don’t forget to check back right here regularly for all your General Hospital news, information and spoilers!