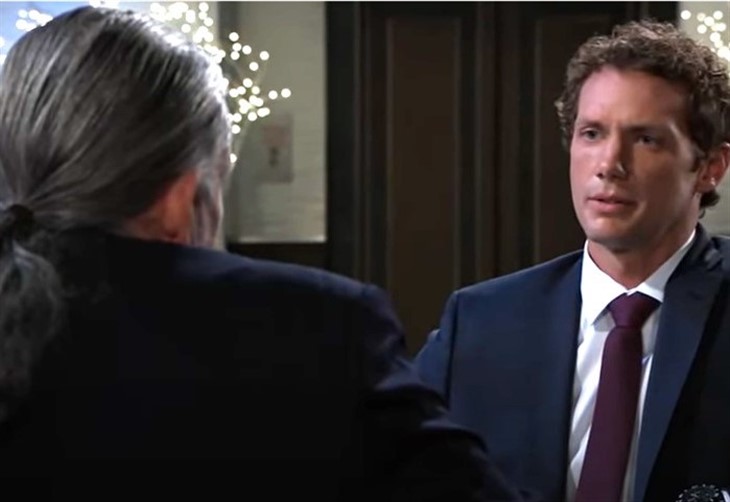 General Hospital spoilers and GH updates reveal in Port Charles, NY Brando Corbin (Johnny Wactor) has been working undercover for Sonny Corinthos (Maurice Benard) for some time. Unfortunately, Brando has made some decisions that Cyrus Renault (Jeff Kober) doesn’t agree with on General Hospital. Cyrus is becoming very suspicious of Brando and his lack of aggression when it comes to his job. What will Cyrus demand of Brando to prove his loyalty?

General Hospital Spoilers – Jason Morgan Is Under His Skin

General Hospital’s Cyrus is becoming more and more annoyed with Jason Morgan (Steve Burton). Cyrus blames Jason for his mother’s disappearance. GH spoilers show Cyrus wants his mother home where she belongs and he isn’t getting it. Cyrus could decide that Brando needs to take out Jason to get his mother back.

Unbeknown to Cyrus, Jason had nothing to do with his mother’s kidnapping on the ABC soap opera. Jason ended up involved after the kidnapping had already taken place. Jason isn’t about to tell Brando this either. Could Carly figure out what Brando is up to and confess to the kidnapping to save Jason?

General Hospital’s Sasha Gilmore (Sofia Mattsson) has just done a tv interview with GMA3. Sasha has brought her drug use to light. Cyrus knows that Sasha blames him for her drug use. After all, the drugs that Cyrus gave Sasha almost killed her. Cyrus could very easily ask Brando to get rid of Sasha, he’s already ordered him to do so once before. Cyrus has already threatened Brando and could certainly threaten his life again. Will Brando follow through with Cyrus’ orders this time?

General Hospital’s Cyrus might no order Brando to kill someone. Cyrus may decide to kidnap someone in retaliation for his mother’s kidnapping. There is a list of people that Cyrus could have taken to get revenge. Cyrus’s mother is old and disabled. Laura’s mother is close to Florence Gray’s (Annie Hutton) age. Cyrus could think that his sister would do something faster if she had some incentive. Danny Morgan (Porter Fascullo) is Jason’s son.

Since Cyrus blames Jason, General Hospital rumors hint he could certainly have Danny kidnapped. Brando could get close enough to the family to take Danny fairly easily. Would Brando use a child to get what he wants? Avery Corinthos (Ava and Grace Scarola) is another possibility as is Jocelyn Jacks (Eden McCoy) especially if Cyrus figures out that Carly is the one behind the kidnapping. With Brando’s life on the line as well, he might not have a choice about taking one of the kids.

General Hospital’s Cyrus is determined to get his mother back no matter what it takes Cyrus believes Brando will do what he orders him to this time to protect his life. What will Cyrus expect Brando to do to prove his loyalty? Will Brando come through or die trying to protect Cyrus’ victim?

Be sure to catch up on everything happening with GH right now. Come back here often for General Hospital spoilers, GH news, and episode updates.